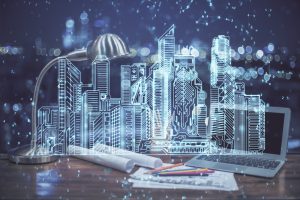 The highly interconnected smart city that is evolving is built on having real-time data openly available and capable of being shared across agencies.

There are many cities that can benefit from real-time information streaming from streets and buildings in new ways. For example, during the Covid crisis, analysts with the City of Chattanooga began to analyze traffic volumes and patterns to assess the potential impact on tax revenues from fewer commuters. “One of the things we did during the pandemic is monitor traffic, and as we saw critical dips in a lot of our main corridors, we knew that was going to be having an impact on our tax revenues,” says Kevin Comstock, smart city director for the City of Chattanooga. “As we began to see those things climb out of Covid, taxes started to return back.” One of the services under consideration, he relates, was to help the city predict business bumps, based on metrics arrived at by measuring traffic volume.

See also: The Need for a Smart City Nervous System

Applying real-time data to city management was the theme of a recent panel discussion I had the opportunity to moderate, in which Comstock was joined by Richard Hardiman, CEO and founder of RanMarine, and William Muller, vice president of business development for Seoul Robotics, sponsor of the event. Key themes explored included the value of real-time data in enabling new city services, as well the interconnectedness of this data from various sources, serving a range of agencies.

“From the city’s standpoint, we look at these opportunities to bring in robust, smart systems,” says Comstock. “At the end of the day, businesses want to get their goods or deliver their goods. The more reliable the sustainable system or delivery platform, the better off they’re going to be.” We’re only at the beginning: smart cities will be making significant inroads not only in smart transportation but across the breadth of city life and services in the years to come. Improved health, energy, and mobility are “key areas smart cities can focus on and make tangible improvements over the next five to ten years,” says Comstock.

While Comstock’s initial efforts began in the transportation realm, he and his team recognize that the traffic monitoring and transportation systems they have put in place have wider applications across cities. “As things have developed, we’re looking at the city and its different dynamics,” he says. “How can we approach problems from a different perspective? We’re working with other agencies to look at what assets and data resources they already have, and aggregate some of that information and look for trends or incidents to take action on. One of the key things to being a smart city is to utilize the information that you have at your fingertips already, and make use of that in a proactive fashion.”

For example, city agencies are developing LIDAR systems for vehicles to increase pedestrian safety. “We’re also taking and aggregating data from across the city in conjunction with the police department and others, to pull together a roadmap and this general understanding of what our pain points are, and how we can help mitigate some of those things before they become a problem. We’ve got tons of technology in our hands, it’s about applying them in some new fashion that hasn’t been thought of yet.”

The highly interconnected smart city that is evolving is built on having real-time data openly available and capable of being shared across agencies, and even between cities, adds Hardiman. The key is to “have data at their fingertips to make decisions. Whether that’s on a big screen, where they can move stuff around, or whether it is on laptops, I hope it makes it easier to be a city official, and do their job effectively with the power of data inputs.”

Openness is essential to this vision, says Muller. “Data is going to need to be accessible to many different parties, from connected vehicles to transportation systems to a person down the street looking at his cell phone.” Also, a piece of this equation is autonomous vehicles, he continues. Currently, they are most often seen in “heavy industries, especially mining and things like that, where the environments are more conducive right now to that technology, But we see the same technology developed for those industries, specifically the 3D data from 3D LIDAR sensors and 3D radars, are going to prove to be beneficial in the smart city industry. We believe that is ultimately going to be one of the technologies required to help these autonomous vehicles see further.”