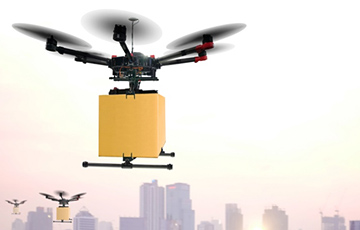 Commercial drones are being used across various industries to help companies save money, improve safety, and enhance the efficiency of their operations.

New regulations by the Federal Aviation Administration (FAA) in the U.S., for the first time allow commercial drones used for deliveries and services to fly overpopulated areas. These rules include strict requirements for tracking these drones to address safety and FAA security concerns.

As per these new safety rules, all but the smallest drones will have to broadcast a radio signal with a digital license plate and a flight location. Additionally, starting in 2022, the FAA’s Remote ID requirement will necessitate every drone sold in the U.S. that weighs more than 0.55 pounds to come with a way to broadcasts its location and identification to local authorities. One way to think of the technology is as a digital license plate for drones.

This technology already in use in Parrot drones, is now available and suitable for all commercial drones allowing WISekey to work directly with other drone manufacturers. The integration of WISeKey’s digital security technologies from inflight control systems down to infrastructure is designed to help drone manufactures further guarantee the security of their drone flights and recorded data for professional users.

Public safety, security, defense, and inspection professionals comprise a growing market share of drone users who demand the highest levels of privacy, encryption and security for their flights. Drones have many useful applications but can also be used to intentionally cause harm. Additionally, drones themselves can be subject to unlawful interference.

WISeKey’s VaultIC4xx series of secure elements offers reliable solutions to secure and prove the drone’s digital identity, and at the same time protect data and firmware against compromise when stored in the drone or in transit. This guarantees a secure connection between the controller and the drone. WISeKey’s VaultIC4xx secure elements are certified by the U.S. National Institute of Standards and Technology (NIST) following FIPS140-2 Level 3 standard, one of the strongest and globally recognized digital security levels. These are developed on Common Criteria EAL5+ certified hardware, another government grade security certification.