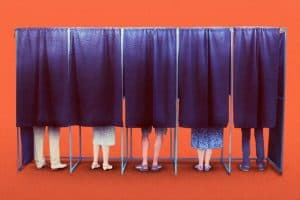 A 47-page report by an independent lab finds that Voatz voting platform meets all US Election Assistance Commission (EAC) guidelines.

Controversial voting platform provider Voatz announced that an independent lab has determined that its platform meets all federal voting system guidelines as set by the US Election Assistance Commission. A 5-month period of testing in multiple areas including security, source code, and system integration resulted in a 47-page report by Pro V&V, which said Voatz remote accessible ballot delivery, marking, and return system used blockchain-based infrastructure throughout the process. The testing also analyzed the use of the mobile app of smartphone accessibility tools such as screen readers, voice control, and language capabilities.

“Pro V&V verified various controls and measures to meet the required security standards including protection of the critical elements of the voting system; establishing and maintaining controls to minimize errors; protection from intentional manipulation, fraud, and malicious mischief; identifying fraudulent or erroneous changes to the voting system, and protecting the secrecy in the voting process. During the security evaluation, Pro V&V was able to verify that the Voatz RABDMR utilized a blockchain-based infrastructure from the server throughout the remainder of the process,” the report stated.

Voatz made news in February when they were blamed for the
fiasco that was the Iowa caucuses. The company denied any responsibility,
claiming they had no involvement in the caucuses at all. An MIT study found serious
security flaws with the platform, but no evidence that it had been hacked.
Voatz says they have successfully completed 67 elections, including 11
governmental ones. Their platform is designed for military members, the disabled,
and other non-traditional voting groups.

”We are pleased with Pro V&V’s conclusions that Voatz
operates exactly as it’s designed to operate,” said Nimit Sawhney, Voatz
co-founder and CEO. “Their fundings confirm our expectations, and add further
fuel to support our mission that citizens can vote securely using a smartphone
application and have total confidence their ballot is counted while remaining
fully secret.”