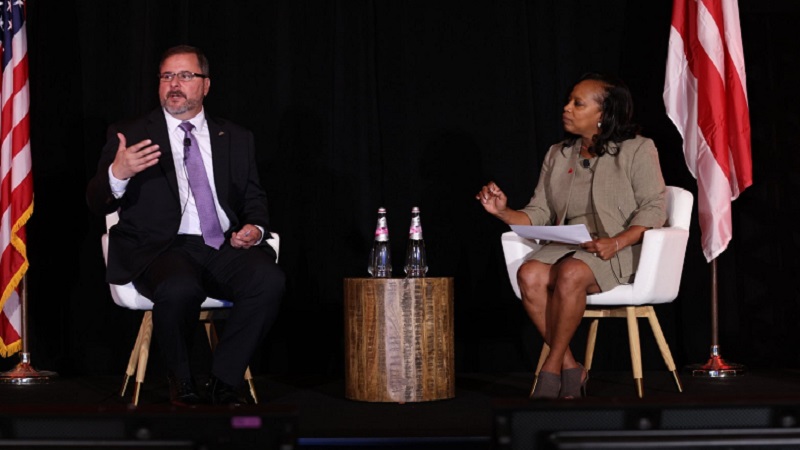 On a modern battlefield, the side that can respond the fastest to changing information gains decisive advantage, and edge technology is proving to be the enabler of that crucial advantage, a senior U.S. Air Force  Department tech leader said today at the Red Hat Government Symposium in Washington, D.C.

Before the advent of edge computing capabilities, warfighters communicated via radios transmitting situational information, and they would execute the mission accordingly or adjust based on what they saw. Fast forward a few decades, and the USAF has introduced more digital inputs that allow pilots to have more information beyond what they’re told.

“What we are talking about is edge computing expanding the envelope of the missions that we can accomplish and the ways we can accomplish them,” said Winston A. Beauchamp, deputy chief information officer for the Department of the Air Force.

“We’re able to push much more information much farther forward, allowing the operators to adjust their plans dynamically based on the situation they see, and the information gathered by other sensors in the field,” he said.

Edge computing, Beauchamp explained, is propelling the service branch forward to be much more dynamic in its targeting and assessment cycle. And it allows the Air Force to use its limited forces more efficiently and react more quickly to changes.

In addition, utilizing edge computing also has allowed communication capabilities for warfighters in complicated communication environments to “gracefully degrade,” which is an essential key to the architecture, Beauchamp explained.

“We can’t expect to have full communications capability in the middle of a battle like we do in peacetime, but we must remember that doesn’t mean we’re going to be completely out of communications,” he said. “Edge technology allows us to span that whole middle ground, still communicating, and getting information from the environment. We’re not just communicating via voice.”

Warfighters can use and share geospatial information, targeting information, and weather data to obtain situational information during wartime, which allows them to adjust mission plans when needed.

“That ability to gracefully degrade has to be part of the architecture and that architecture has to span across multiple technologies to the edge,” Beauchamp said.

However, there are some barriers to moving computing functions to the edge, Beauchamp explained.

For example, a prospective adversary might be extremely cyber-savvy and able to attack the service branch’s infrastructure in ways that will degrade its ability to support units in the field. Having an environment that is resilient enough to resist and respond in the face of those attacks will be critical, he emphasized.

Beauchamp also explained that achieving a high level of effectiveness with edge technology to obtain a decision and information advantage in modern warfare will require the exchange of information across the military services.

“In the future, we’d like to operate on an enterprise network that allows that interchange to be almost instantaneous instead of having to go through the handoffs between enclaves,” he said.