As sea levels rise, the risk of flooding has spread around the world. The ability to check and maintain the various flood barriers that have been developed is therefore critical to the safety and wellbeing of regions adjacent to rivers and other waterways.

Similarly, in arid regions, check dams are often used to retain soil after periods of rainfall, with metal plates aiding the construction of retaining walls. Such developments are supported by sheet piles, which are elements folded from flat material and then driven vertically into the ground to create walls and help to stabilize the soil.

A team from Harvard’s Wyss Institute for Biologically Inspired Engineering has developed a robotic solution that can help to perform this task and autonomously drive interlocking steel sheet piles into the soil. 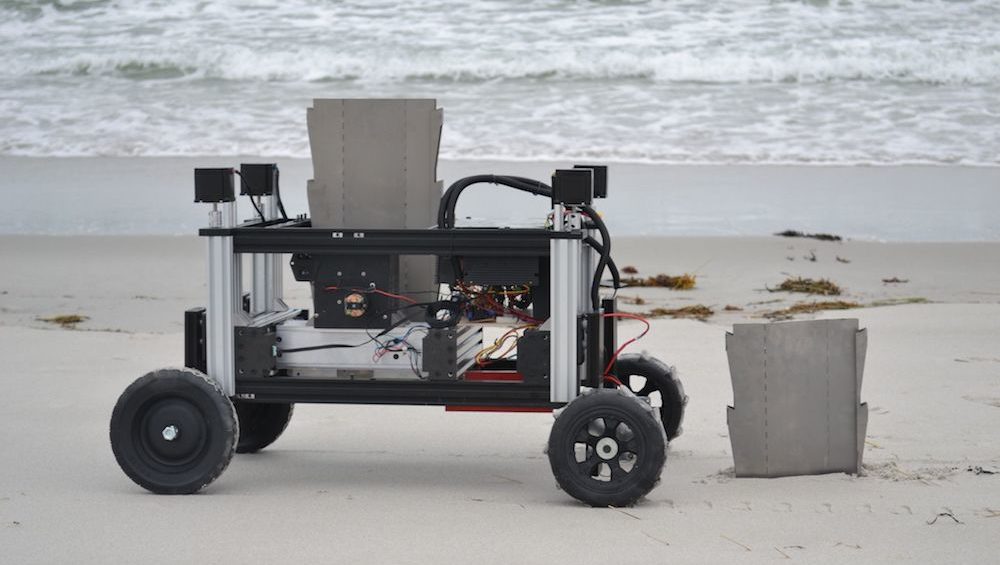 The device, known as Romu, was inspired by termites and the way they built mounds. The work initially focused on automating the site preparation process before moving on to the installation of foundations and then the full range of land restoration tasks, even in the most remote of environments.

“In addition to tests in the lab, we demonstrated Romu operating on a nearby beach,” the team explains. “This kind of demonstration can be an icebreaker for a broader conversation around opportunities for automation in construction and land management. We’re interested in engaging with experts in related fields who might see the potential benefit for the kind of automated interventions we’re developing.”

The team believes that Romu will work best in a large team of robots working as a swarm. A number of computer-simulated demonstrations showed that such a swarm would be able to capitalize on various environmental cues to construct walls in a wide range of environments.

“The swarm approach gives advantages like speed-up through parallelism, robustness to the loss of individual robots, and scalability for large teams,” the team says. “By responding in real-time to the conditions they actually encounter as they work, the robots can adapt to unexpected or changing situations without needing to rely on a lot of supporting infrastructure for abilities like site surveying, communication, or localization.”

The initial results have proven sufficiently encouraging to prompt the team to expand the possible range of use cases to include support for agriculture in various arid regions, where groundwater retention structures are vital. They even believe flood-barrier construction in areas prone to hurricanes could be an option. The ability for a small and versatile machine to access these hard to reach areas can be a real game-changer.