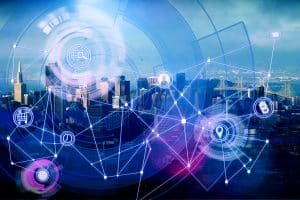 IoT infrastructure is one possible way to build an edge computing environment.

Internet of Things (IoT) and edge computing are among the hottest buzzwords today. And although they don’t necessarily go hand-in-hand, pairing IoT with edge computing is one common strategy for getting the most value out of both categories of technology.

The history of the IoT stretches back decades. But it has only been within the past several years — or the last decade, perhaps — that the IoT has finally matured and proven its readiness for large-scale real-world use.

The big idea behind edge computing is that
when workloads are hosted closer to users, network latency and reliability
decrease, leading to a better end-user experience.

You don’t need IoT devices to build an edge
computing architecture. You can host edge applications on any type of
infrastructure, provided it is located closer to end-users than central data
centers.

Thus, a conventional server deployed in a
retail store that can handle payments faster than a remote data center could be
an example of edge architecture. Even PCs that handle data storage or processing
that would otherwise take place in the cloud could be considered a form of edge
architecture.

You also don’t need an edge architecture to
use the IoT. You can deploy IoT devices and manage them from traditional data
centers located at the network’s center.

IoT devices at the edge

All of this said, IoT devices are one
excellent way to build the infrastructure required to create an edge computing
environment.

In other words, by deploying IoT devices and
using them to handle data storage or processing, organizations can construct an
edge architecture.

This approach is especially advantageous in
situations where the IoT devices collect large amounts of data, and waiting for
that data to be transferred to a data center, processed, and sent back would
take too long to achieve performance goals. Running workloads directly on IoT
devices can also decrease security risks by minimizing the amount of data that
travels across the network.

The major challenge to using IoT devices as
the basis for an edge architecture is that IoT devices aren’t always capable of
heavy-duty data storage and processing. If your devices are lightweight sensors
with minimal storage and CPU capacity, they may not be capable of meeting your
workload performance requirements.

The relationship between IoT and edge boils down to this: IoT infrastructure is one possible way to build an edge computing environment. Increasingly, industry consensus is to position IoT as one of the many use cases of edge computing.