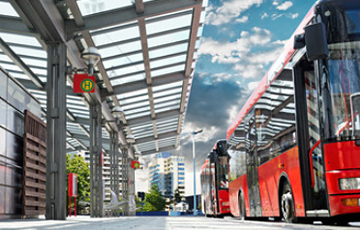 The market value for ITS deployed in public transport operations in Europe was €1.56 billion in 2018. Growing at a compound annual growth rate (CAGR) of 6.8 percent, this number is expected to reach €2.16 billion by 2023.

The North American market for public transport ITS is similarly forecasted to grow at a CAGR of 7.3 percent from €1.07 billion in 2018 to reach €1.52 billion in 2023. Berg Insight is of the opinion that the market for ITS in public transport is in a growth phase which will continue throughout the forecast period. A growing awareness among public transport providers of the various benefits of ITS along with increasing demands from travellers for convenience and accessible real-time information contribute to a positive market situation.

A group of international aftermarket solution providers have emerged as leaders on the market for public transport ITS. Major providers across Europe and North America include Canada-based Trapeze Group and Germany-based INIT with significant installed bases in both regions. Clever Devices and Conduent hold leading positions on the North American public transport ITS market. The former is about to expand into Europe, while the latter also is an international provider of fare collection systems. Additional companies with notable market shares in North America include Cubic Transportation Systems and Avail Technologies. Examples of major vendors on national markets in Europe include ENGIE Ineo and RATP Smart Systems which hold leading positions in France and IVU which is an important player primarily in the German-speaking part of Europe. Vix Technology, Flowbird and Ticketer are moreover major providers on the UK market. Other significant players include the Spanish groups GMV, Indra and Grupo ETRA, French Thales, Atron in Germany, Scandinavian FARA and Consat Telematics, and the Austria-based companies Swarco and Kontron Transportation. Volvo Group is moreover a notable player from the vehicle OEM segment.

“The penetration rate of on-board computers featuring GPS location functionality and wireless communications is now at very high levels in both North America and Western Europe.” 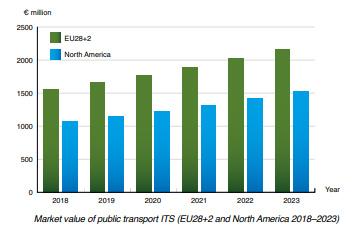 The Mediterranean countries and Eastern Europe are however still lagging. “ITS providers in Eastern Europe have had impressive growth in the last year, and as long as countries in the region continue to experience economic growth the demand for ITS solutions will further increase”, continued Mr. Bjorkman. He adds that in the mature markets with a high penetration rate, a clear trend is the increased demand for ITxPT labelled ITS solutions compatible with third-party systems.

“The trend is especially evident in the Nordics where the general IT maturity is high and public transport providers often have experience from existing solutions”, concluded Mr. Bjorkman.