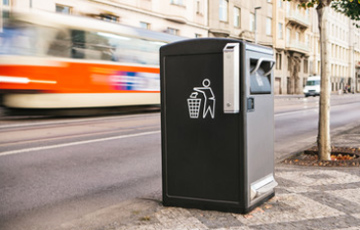 These wirelessly connected fill-level sensors can either be pre-integrated into waste bins and containers or retrofitted into existing ones. Europe accounts for more than 50 percent of the installed base. Markets such as the Benelux, France, the UK, Spain and the Nordics have seen particularly positive market developments. The smart waste management market in North America is less developed in comparison to the European market and had an installed base of 85,000 smart waste sensors in 2018. The Rest of World market will have the highest growth of 36.5 percent and reach nearly half a million installed sensors by 2023.

The world’s leading smart waste sensor technology vendor in Q3-2019 was the US-based smart bin provider Bigbelly, which had a global market share of 13.3 percent. Finnish Enevo and Chinese Dingtek Technology shared second place. Enevo is a leading player in Europe and North America while Dingtek has a strong position on its domestic market. Other important smart waste sensor technology vendors include European companies such as BH Technologies, the SUEZ subsidiary SigrenEa, Waste Vision, Sensoneo, SAYME, FarSite Communications, Nordsense, EMZ Environmental Technology; Compology and OnePlus Systems from the US; Evreka from Turkey and Ecube Labs from South Korea.

The top ten vendors accounted for more than 60 percent of the global installed base of smart waste sensors. Many vendors have chosen to focus on specific customer segments such as public litter bins, commercial waste containers or textile recycling banks.

“The interest in smart waste sensor technology has increased significantly over the past 18 months and is now increasingly seen as an integral part of any smart city strategy”, said Levi Ostling, IoT Analyst, Berg Insight. 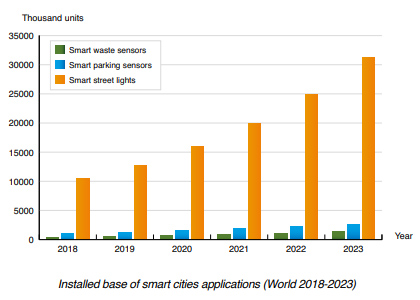 Cellular 2G/3G/4G technology has prevailed as the dominant connectivity option for smart waste sensor installations, accounting for around three quarters of the global installed base in 2018.

LPWA technologies such as NB-IoT, LTE-M, LoRaWAN and Sigfox are however establishing themselves as attractive alternatives due to their lower power consumption – a feature that is essential for the performance of smart waste sensors as they are mainly battery powered. LPWA communications technologies accounted for around 20 percent of the global installed base of smart waste sensors in 2018. The share is expected to increase to more than 50 percent by 2023.

“The transition to LPWA will significantly improve the overall feasibility of smart waste sensor investments and prompt a growing number of large-scale initiatives in the near future.”