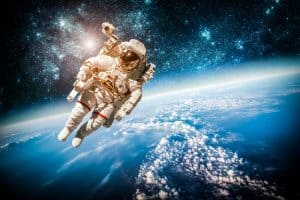 Edge computing in space addresses the same issues as use cases across many industries. They all collect and analyze data to prevent unnecessary downtime.

Edge applications, no matter the use case, are, in many
cases, about very similar issues – how to use data to make faster decisions
that positively impact the business or about delivering better application
experiences. A project that Red Hat is doing with NASA illustrates this point.
With all edge computing applications, you want to get compute power and
sophisticated analysis close to the source of data generation so critical
decisions can be made in time to take suitable action. The challenge is how to
balance the tradeoffs in available compute power in a limited amount of
physical space, bandwidth and latency with the need to quickly gather, analyze
and act on the data to design an optimal solution. RTInsights recently sat down
with Chris Sexsmith, Program Director for Data
Science and Edge in the North American public sector at Red Hat, to discuss
these and other edge computing issues.

Here is a summary of that conversation.

RTInsights: What are
the drivers for edge computing?

Sexsmith: There’s
a ubiquitous desire to have answers at the tip of your fingers across all
industries these days. You want data to be gathered and analyzed fast, with
some fairly complex compute, to have a relevant action available as close to
where that action needs to be implemented. With the advent of AI/ML
technologies, having that type of analysis very close to where the data comes
in is an absolute requirement for many companies to stay competitive.

Further, it’s incredibly important for us to update how we’re using that data as time goes by. Data is not a static thing; it’s constantly changing.  Organizations need to actively gather/analyze data, update ML models, and push them back out to the edge as new things are learned. Some of the potential use cases in the public sector, such as satellite telemetry analysis, edge devices on the International Space Station (ISS), or the Forward Operating Base “back of a Humvee,” all require us to respond to the data coming in at a very rapid rate. In such applications, lives can be at stake and every millisecond has consequences.

RTInsights: How do
companies make sense of the data?

Sexsmith: This is
reliant on data analytics and machine learning. To properly react to that data,
we must understand the data coming in and be very fussy about the data that we
leverage. To do that, data scientists and data engineers spend a lot of time
analyzing that data and ensuring that their predictions from a machine learning
model are accurate. Not only that, they must ensure that it continues to be accurate
out into the future, so an iterative process is a requirement that is often
overlooked. You need to be able to accommodate new inputs, spot new patterns,
and always make sure the data, as it changes, is analyzed to confirm that the
model in use isn’t drifting or giving bad results.

This is why edge and data science go hand in hand. The need
to perform these actions at the edge usually means that we’re performing
processing that is incredibly time-sensitive and dependent on getting that
response to the user. Many times, these are life-and-death situations where we
can’t afford to wait for data to be sent back across the country, across the
globe, or even back to earth in the ISS example to perform these operations and
get the insights we need to take immediate action.  Those answers must be very fast and that’s
the real driving force behind how companies are using data at the edge.

Sexsmith: It’s often a type of hub-and-spoke
pattern. That’s where applications with AI capabilities need to be developed
and life-cycle managed centrally and then pushed out to edge sites. There must
be some sanity in how we’re developing these applications, entangled with ML
models, and one way to do that is with containers. Containerization, in
general, creates a very easy way for us to pick up and move applications and
push them to disparate locations, other data centers, and straight to the edge.
Containers are lightweight and portable, so building on a platform such as
OpenShift allows us to have a ubiquitous platform for developers to not only
develop these applications but to also push them out to whichever location
makes the most sense even in physically small spaces. Organizations can be
assured that these containerized applications will run at the edge just as they
did in the data center. Similarly, we can push those containerized ML models
out to where they need to be used, so they’re relevant for the task at hand.

RTInsights: What use
cases and benefits have you seen?

Sexsmith: The use
cases and benefits for edge computing center around fast responses. It’s about
being able to process a ton of data, get a very quick response to that data,
and deliver the insight in time for appropriate actions to be taken, especially
in life-and-death situations. An example is self-driving cars. We don’t have
time to beam data back to a data center to determine whether we have to stop
for a pedestrian. We have to make that decision very, very quickly and that
requires an edge solution.

The benefits around this are straightforward; it’s the fact
that humanity is not getting more patient. We’re getting less patient, and we
must respond faster and faster to the data coming in to make these decisions
that drive many businesses and a lot of the programs around the world today.
It’s a requirement, not a “nice to have” feature for most businesses anymore.
Competitive advantage often lies in the accuracy and speed of the response to
the consumer.

RTInsights: A
particularly interesting case you’re working on is the role that edge computing
is playing in space. Can we talk about that?

Sexsmith:
Absolutely. The requirements in space cannot be understated in the sense that
we have to approach it very much as I’ve been saying, as a life-and-death
scenario, because it often is. For an astronaut on a spacewalk, their spacesuit
is of obvious critical importance, so they need the ability to make decisions
based on sensor data coming from the suit, and once the astronaut is back on
the ship, they assess preventative maintenance work to prevent future failures.
To take this data in and quickly respond to it, we have to move further and
further towards an edge model that also considers things like: once the
application is in space, we probably will not be able to change it for a very
long time and that sending the data back for analysis to Earth is not an option
when you have to make almost instant decisions with slow, intermittent, or
non-existent connectivity. So, we have to think about the platform’s stability,
the stability of the solution that we push out, and we need to ensure that
we’re doing it in a very responsible manner.

For example, in an International Space Stations project in
which Red Hat partnered with IBM and HPE, we sent a box to the ISS to do
genetic analysis and research. This provides a net benefit to NASA because
we’re still learning a lot about genetics in radiation-laden, zero G
environments. The faster we can perform these activities on the ISS, the more
science we can effectively perform. We’re only just scratching the surface as
to what the long-term impact is on humans in space, and we can shorten that
learning curve by doing a lot of that processing onboard the ISS itself using
edge computing with OpenShift.

The future of us working with NASA is extremely exciting.
We’re all-in on doing everything that we can to help the space industry move
forward and eventually have colonies on the moon and on Mars.

RTInsights: You said
that once there’s an application up in space, it stays there for a very long
time. Are you able to upload fixes and changes and send data back to Earth
using high bandwidth, low latency communication to then do further analysis and
send results back up?

Sexsmith: There is satellite connectivity, which is
extremely low bandwidth to the ISS – that constraint dictates largely how the
data should be utilized. So, we have a window where we can push fixes and pull
down results, but this points directly to the benefits of edge computing. We
can push and pull back only what is absolutely necessary. If we had a big pipe
like 5G everywhere, then we might have other options with regard to edge
computing since we might just be able to go directly to the datacenter or
cloud, but again, this all depends on the use case requirements and the
specifics at these remote locations.

RTInsights: I can see
where this could apply to other areas. Instead of the ISS, it could be an oil
rig in the middle of the North Sea or an autonomous car where you do not have
the time to send data somewhere to be processed. Is that right?

Sexsmith:
Exactly. The use cases for edge computing are very similar across industries.
For example, for industrial manufacturing, the preventative maintenance use
case can be extended to manufacturing lines where sensor data is collected and
analyzed to prevent unnecessary down time, like in the space suits on the ISS,
which can also apply to aircrafts – it is all about fatigue of the equipment,
time to replace, the relative statistics and understanding when to replace a
component before it fails. These are the things that we must actively monitor,
regardless of the industry. And that’s one of the more interesting points
around edge computing:  we think of them
as very separate use cases, but around 90% of the underpinnings are actually
quite similar. It’s the last 10% or so that is highly contextual and
industry-specific.

If you think about it, it’s really about acting fast using
data. One of the more interesting quotes I’ll happily steal that I recently
heard is that organizations need to “operate at the speed of
relevance.”  Whether we’re talking about
autonomous cars or oil rigs, doing data science in space, or aggregating
telemetry on the satellites and performing analysis on data before it gets sent
down to earth, what we’re all trying to do is give that speed of relevance to
organizations that need to make data-driven decisions fast, ensuring that
they’re getting the answers they need in the time that they need them. The
requirements for that are always getting tighter and tighter. We need
increasingly fast responses to everything from our thermostats at home to
genomic data on the ISS. As the world speeds up from a technology standpoint,
getting accurate and useful insight from the data at hand becomes critical, and
we’re constantly improving and iterating our understanding of that data with
the technology as fast as humanly possible.