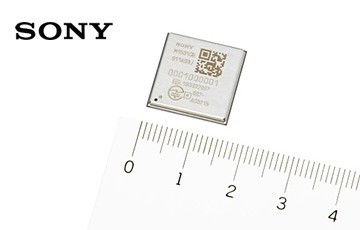 Contributing to delivery of wireless communication services that are stable over long distances and while moving at high speeds.

Sony Corporation today announced the upcoming release of the CXM1501GR communication module, which is compatible with the ELTRES™ low-power wide area (LPWA) wireless communication standard that Sony has developed for IoT applications.

Equipping IoT devices with this communication module enables them to connect to the ELTRES™ IoT Network Service, which is scheduled to begin service rollout this coming autumn from Sony Network Communications Inc.

Sony is positioning this product for application in a broad range of IoT devices, aiming to develop various services making the most of stable wireless communications over long distances and while moving at high speeds, thereby creating a new market.

Most IoT systems wirelessly transfer information obtained by various sensors to cloud servers, where the data is collected and processed, and the output then sent to user devices such as smartphones or tablets for display. An LPWA network is a low-power wireless telecommunication technology used for transferring low-bit data across a wide area, and it is expected to see significantly growing demand for communication in IoT systems.

The new CXM1501GR communication module integrates a newly developed transmitter LSI that transmits signals conforming to the protocol of the ELTRES™ wireless communication standard in the 920MHz band as well as a circuit for impedance matching with an externally mounted antenna. Also included are a GNSS receiver LSI—an important IoT sensor that obtains time and position information—and high-frequency components such as the SAW filter required for the GNSS receiver. With all of these components built in, this product expands the ease and versatility of IoT edge device design.