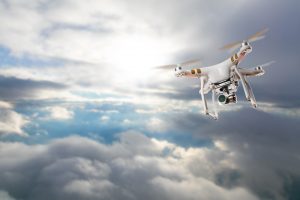 Japanese telecommunications giant Softbank is teaming up with with a U.S.-based drone builder with the goal of starting a drone-powered internet service by 2023.

Softbank and AeroVironment said they’ve already assembled the first drone, called the HAWK30. It is powered by solar energy and has a wingspan of 260 feet. The solar panels power 10 electric motors and the drone will fly 12 miles (65,000 feet) above sea level, which is twice as high as commercial aircraft.

Softbank calls it a “floating base station in the stratosphere,” and says the high altitude provides a steady current and may yield more widespread LTE and 5G coverage than can be found at lower altitudes. One High Altitude PlatformStation (HAPS), as the HAWK30’s genre of base stations are called, could provide service over about 125 miles in diameter, and about 40 HAPS could cover the entire Japanese archipelago, the company says.

Softbank is particularly interested in creating a method of connectivity that doesn’t require wired or radio-based assets, which are likely to be damaged or destroyed by a natural disaster. It is studying satellite backhaul internet links that would operate in low earth orbit.

Softbank is also working on integrating its HAPS augmented service into the customer experience.

“Smooth handovers between networks provided by terrestrial base stations and by HAWK30 will also be possible,” SoftBank says. “As a result, communication disruption will not occur even when a person using a smartphone moves from a base station covered area to a HAWK30 covered area.”

That means even in the case of a disaster, the customer won’t experience any problem connecting to their mobile network operator.

“HAPSMobile will support telecom standards for IoT to accommodate various IoT solutions,” HAPSMobile, the SoftBank entity running the infrastructure says on its website.

Disasters aren’t the only thing the drone-based service could be good for. According to Tim Farrar, president of TMF Associates, it could also be a cost-effective way to provide internet coverage to remote areas.