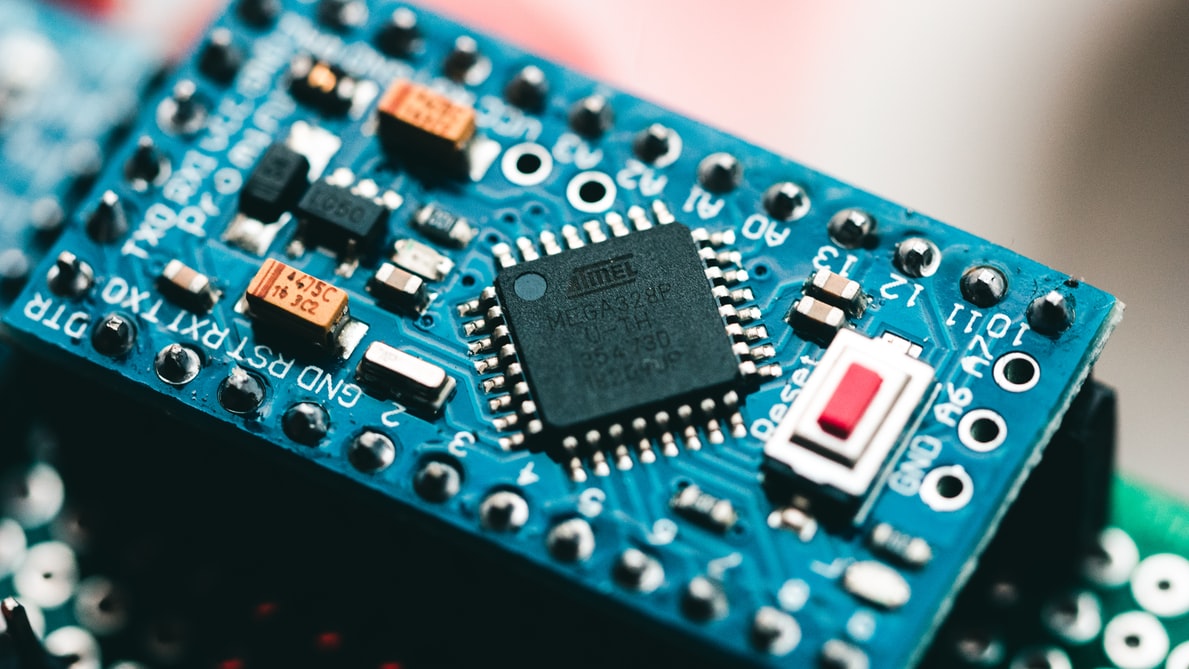 If you have had a chance to play around with some of the new Arduino-enabled hardware platforms such as the ESP8266 Wi-Fi SoC, you may already have used an online IoT service for your project. In this article, we will show you how to set up your own online service by setting up a Virtual Private Server (VPS) and server software for your Arduino IoT project.

You may also like: Building an IoT System Using Arduino and IoT Cloud Platform

In addition to setting up your own VPS, we will show you how to install a simple example that lets you control LEDs, lights, etc., by using a browser. The following figure shows how any number of devices can be controlled in real-time by navigating to your own VPS using a browser. The online VPS functions as a proxy and makes it possible for any number of users to control the devices via the online server.

Some of the benefits of using an online server and operating it as a proxy for routing messages between users and the devices are:

Setting up your own VPS may sound complicated and expensive, but the reality is that setting up a VPS is very easy and the cost can be minimal. It is possible to find VPS services as low as $8 a year. My favorite site for shopping for a budget VPS is lowendbox.com and one of my favorite VPS providers is securedragon, where you can get a three-month lease for less than $6 and a yearly lease for $12.

A limitation with a budget VPS is the amount of memory available. The budget VPS we are using in this article has only 64Mbyte of memory, thus limiting the selection of IoT server solutions that can be used. The IoT solution we will use in this article is an application server framework that includes an IoT protocol, a web server, a server-side scripting language, and a database in one unit. This software package can easily run on a budget VPS, and in my test environment, I was able to connect 10,000 devices to the online server. I performed the test by using a number of additional Virtual Private Servers, where I ran a number of simulated devices.

A budget VPS will be running Linux. If you have never used Linux, you may think that this is not for you; however, nothing can be further from the truth. An online VPS is the best starting point for anyone new to learning command-line Linux because no matter what you do with the VPS, an easy-to-use web-based VPS control interface will let you restore the VPS to its original configuration by a button click.

For this reason, playing around with an online VPS is a great way to learn command line Linux. If you get your Linux VPS into a state where you are unable to recover it, log into the VPS web control panel and click the re-install button. A fresh Linux VPS will then be available in one to two minutes, and you can start over.

An online VPS enables you to remotely login by using SSH (Secure Shell). If your own computer is running Windows, download the SSH client Putty and start the executable from any directory. Mac and Windows computers typically include a command-line SSH client, thus you can simply type ssh in a command line on Linux and Mac.

When you sign up for a VPS service, such as the budget securedragon VPS (O64), you will receive an email with instructions for how to remotely log into your VPS by using SSH. The instructions include the IP address of your new VPS and the root (admin) password. The following figure shows how to enter the IP address in Putty and how to log in as user root in the command line window. 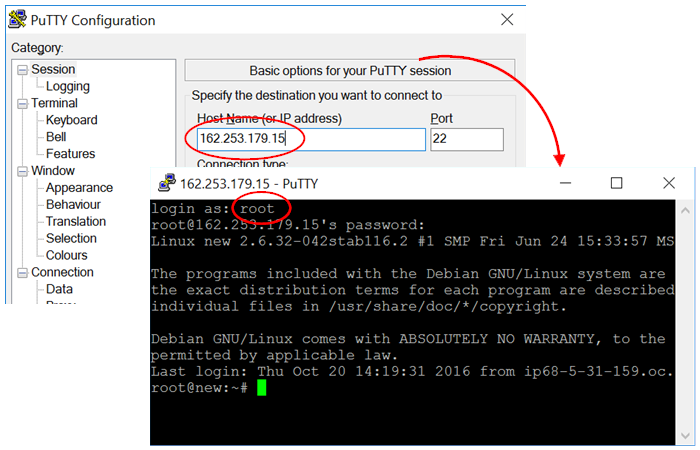 At this point, feel free to try a few Linux commands. Don’t worry about corrupting the VPS since a simple button click in the VPS control panel will re-install the Linux operating system.

To install the server software and the example program, copy all of the following and paste the commands into the SSH console window.

The following video shows the complete installation sequence, from setting up a free domain name, logging into the VPS, installing the software, to verifying that it works by using a browser.

A few notes on the above video:

Downloading and Compiling the Arduino Sketch

The Arduino example has been tested on an Arduino compatible ESP8266 Wi-Fi. However, you should be able to use an Arduino with only minor changes to the startup code.

Download and unpack the Arduino Sketch in any directory:
https://realtimelogic.com/downloads/SMQ/SMQ-Arduino.zip

Open the sketch file SMQ.ino in your Arduino IDE and scroll down until you see:

Open the file led-example.cpp and scroll down until you see:

Change the domain name “simplemq.com” to the IP address of your VPS.

Compile and upload the sketch file to your Arduino board. If everything goes as it should, the Arduino device should show up in the web interface. You get to the web interface by using a browser and navigating to your VPS IP address.

The IoT protocol used in this application is called SMQ, which provides one-to-one communication (via the online proxy) in addition to the publish/subscribe pattern. The publish/subscribe (pub/sub) feature in SMQ is similar to other pub/sub-protocols such as MQTT and AMQP. An online proxy server is typically referred to as a broker when using pub/sub-protocols. The broker is in charge of routing messages between publishers and subscribers. A detailed explanation of how the JavaScript application and the Arduino code work can be found here.

The Arduino environment is great for beginners, but Arduino is very limited in its functionality. Instead of using Arduino, you may also use a ready to use FreeRTOS environment called the esp-open-rtos, but don’t worry, you do not need to go through the complex esp-open-rtos setup. Instead, you may use a pre-configured and completely ready to use environment with an easy to use web-based IDE. The web-based IDE is great for Arduino users that are accustomed to the easy to use Arduino IDE.

Navigate to RTL and download the free ESP8266 IDE.

The IDE, which is designed for educational purposes, includes a pre-configured esp-open-rtos bundled with an easy-to-use web-based C source code IDE. The IDE requires VMWare or VirtualBox. I  prefer VMWare over VirtualBox since I find it easier to use. Note that VMWare is free for non-commercial use. 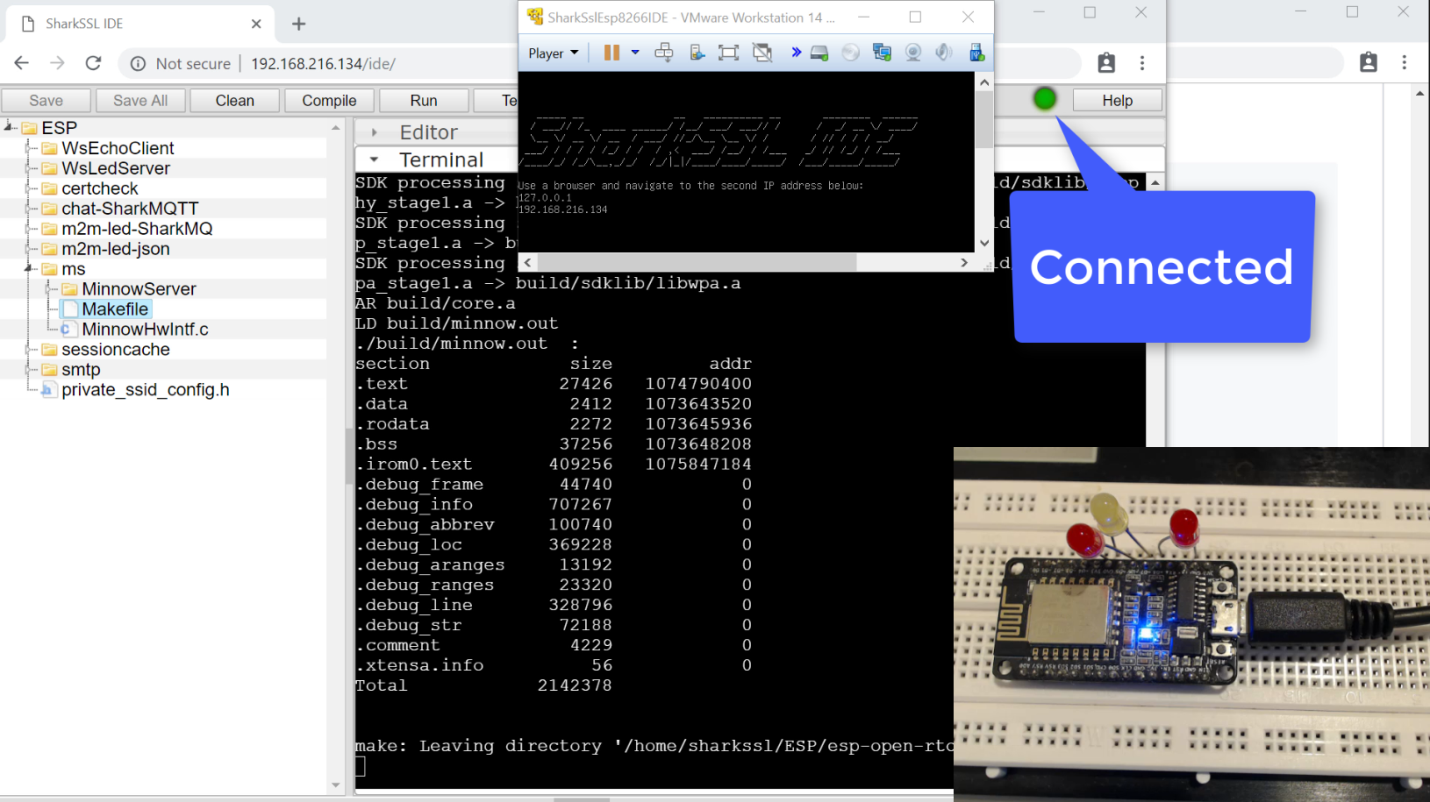 Note that the IP address of your VM will most likely be different than in the above figure. Make sure to click in the virtual machine window for the IP address. If the window is blank, click the window and then press the enter key. You must enter this IP address in your browser to open the web IDE.

The edge node C code is also available for many additional platforms. See the SMQ page on GitHub for details.

If you are a Java programmer and prefer to design the user interface using Java and not HTML, see the article Java IoT Device Management.

Installing the IoT Server On Your Own Computer

You may use the above VPS installation script on your own computer if you are using Linux x86 or Windows 10.

The following video shows how to use the installation script on the Windows Subsystem for Linux. You would use the same installation on a standard Linux distribution.

I have updated this article and added some information on security.

So how safe is this solution?

The SMQ protocol used in the above tutorial has superb security features, but it all boils down to security measures you have to make.

The SMQ protocol provides the seed value. You just need to decide on the hashing algorithm to use. The C function SMQ_init() provides a seed value as an out parameter, and this seed value can be used to create, for example, an HMAC hash. The HMAC hash is then used as the credentials when calling  SMQ_connect. See the SMQ C code reference documentation for details. The server-side authentication callback function performs the same calculation using the seed provided as one of the arguments. See the SMQ broker’s authenticating callback for details.

The SMQ protocol also supports authorization and the article “Have We Forgotten the Ancient Lessons About Building Defense Systems?” goes into details as to why it is a good idea to use authorization.

Getting Started With IoT Using an Arduino and Google