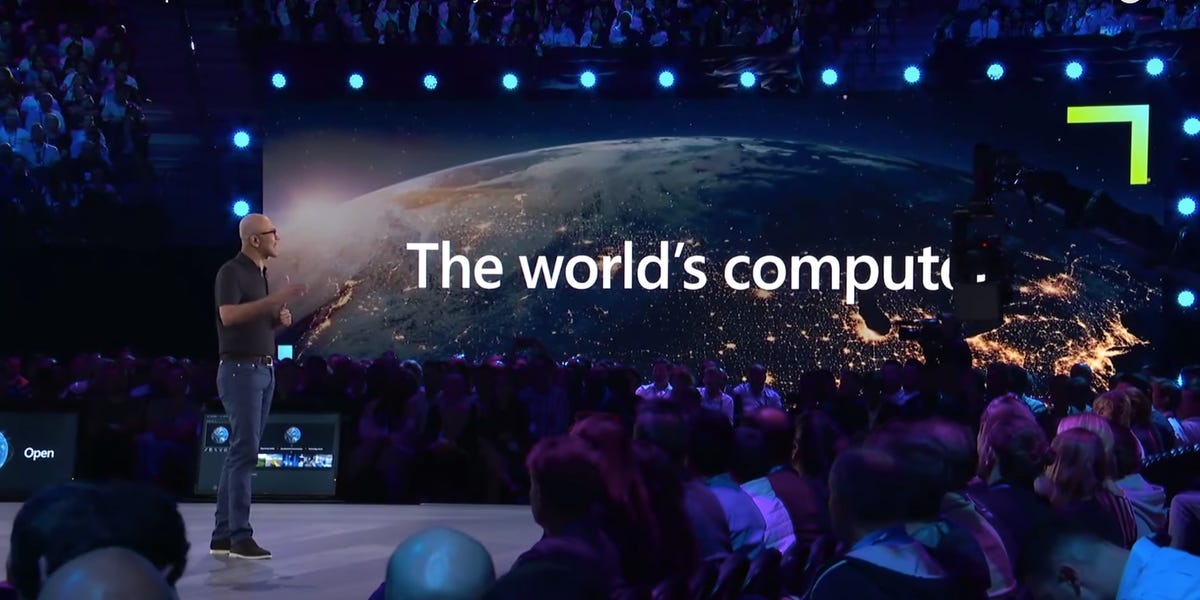 Microsoft CEO Satya Nadella imagines a world with an ever-expanding set of connected devices that process data locally and work in tandem with the cloud – and his company has designed its entire multibillion-dollar cloud business around that concept.

Nadella revealed the company’s strategy for edge computing during Microsoft’s recent shareholders meeting. Edge computing is a buzzword, but it basically means processing data on the devices themselves, instead of offsite in the cloud.

Think of a self-driving car. It needs to be able to process data and make split-second decisions without the delays that would come if that data had to be processed far away in the cloud. That delay is called latency, and reducing it is important not only for self-driving cars but many emerging technologies from augmented and virtual reality systems to “smart” devices people use in their homes.

Microsoft often calls the expanding number of connected devices the “intelligent edge” and Nadella said Microsoft has designed its Azure cloud computing business around the idea that the cloud will work in tandem with devices at the “edge.”

“From day one, when we built out Azure, we had an architectural principle that we would build out a distributed computing fabric that includes the cloud and the edge,” Nadella said. “Today on the cloud side, we have 54-plus data center regions – more datacenter regions than any other public cloud provider – just to bring all of the compute capacity where customers need it, then we extend it to the edge.”

Nadella also mentioned some Microsoft products designed with this philosophy in mind, including Azure Sphere and Azure Arc.

Azure Sphere, released in 2018, is a new system for securing the tiny processors that power smart appliances, connected toys, and other gadgets. Every one of those tiny processors, Nadella explained, can be a compute node for Microsoft’s Azure cloud business.

Microsoft just last month released Azure Arc, a product that lets Microsoft customers run Azure services and management tools inside their own data center or in another cloud, including that of rivals like Amazon Web Services or Google Cloud. Azure Arc, Nadella explains, will be a “control plane across all of the clouds and all of the edge infrastructure.”

Microsoft’s cloud business is already expected by analysts to have an opportunity to overtake market-leading Amazon Web Services because more customers are seeking a so-called hybrid cloud, a mix of on-premises and public cloud computing resources.

Company spending globally on edge computing is expected to rise to $146 billion by 2028 from around $10 billion in 2019, according to the Tolaga Research’s State of the Edge 2020 report.

Got a tip? Contact this reporter via email at astewart@businessinsider.com, message her on Twitter @ashannstew or send her a secure message through Signal at 425-344-8242.