A report from Canalys suggests the adoption of wearables in North America is surging, especially of Samsung’s excellent devices.

Often the two leading smartwatches on tech reviewers’ lists are the Apple Watch and the Galaxy Watch. Both are fantastic devices, and the smartwatch world is becoming the new battleground for the fight between Apple and Samsung which is cooling in the smartphone realm.

Canalys has the North American wearables market pegged at a $2 billion valuation. In the second quarter of this year, there was a notable uptick in wearable purchases.

Samsung was the biggest winner over the year, managing to increase its market share by an eye-watering 121 percent. For comparison, the next biggest manufacturer – Fossil – increased their shipments by 34 percent. 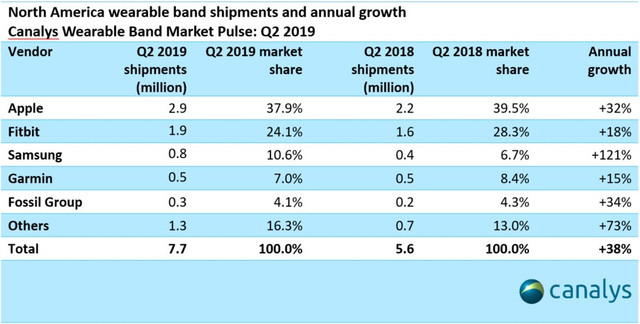 Of course, Samsung and Fossil continue to crank out wearables at a relatively quick pace while most of the other manufacturers have a much slower release cycle.

Apple continues to enjoy the largest marketshare overall, accounting for 37.9 percent of the market. While Samsung is quickly catching up at 10.6 percent, second place currently goes to Fitbit with 24.1 percent despite its growth only increasing 18 percent over the year.

Fitbit has struggled to move beyond its fitness tracker reputation despite dipping its toes into smartwatches. A rumoured Fitbit smartwatch with Alexa built-in, the Versa 2, is expected to launch on September 15th which may help to boost its growth.

Fossil recently launched its Q ‘Gen 5’ smartwatch, but too late to make it in Canalys’ report. Hopefully, along with an expected new wearable chip from Qualcomm, WearOS may enjoy a bigger slice of the market this time next year.