One of the notable and most recent forays in the field of mobile augmented reality was the release of Apple’s ARKit back in 2017. Since then, a number of related projects in the field of AR have been developed, furthering advancements and growth of AR solutions spanning across multiple industries and markets.

AR-based indoor navigation is one of the most popular but still a relatively unexplored niche, as the technology is far from being perfect at present, and it’s necessary to develop greater flexibility and scalability to enable it to flourish.

In this case, we use a modular solution that allows us to upgrade or update any of these components independently of the others. The solution includes three modules: Mapping, Positioning, and Rendering. 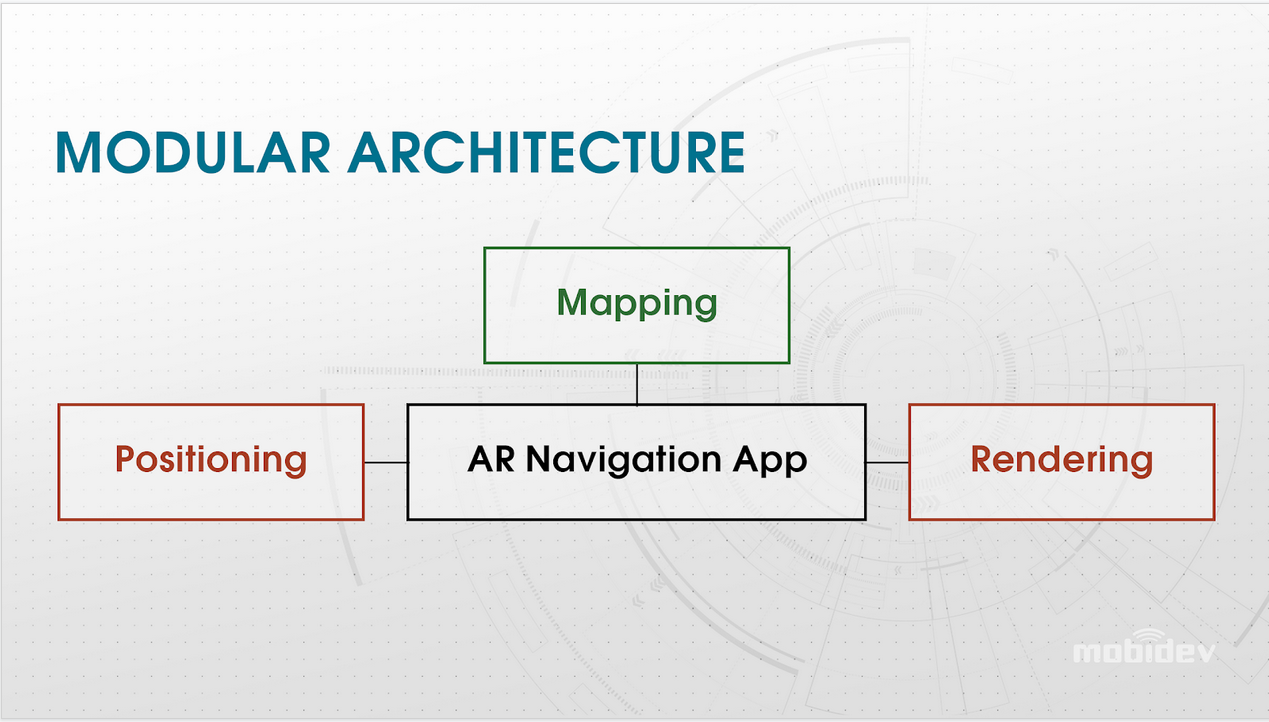 Mapping is the one that has been studied most thoroughly. And the concept of mapping is simple – if we possess both the map and a set of coordinates, we can create a route.

Positioning is slightly trickier. Currently, there’s no standardized and easily implementable way to find the exact coordinates of a user who is indoors.

Rendering, in turn, is dependent upon the accuracy from which Positioning can be determined. It’s easy to render a route in 3D, in the abstract. But it’s more challenging to make sure that the virtual is matching up with the real world, accounting for obstacles and objects like doors, walls and any furniture or other large items.

Rendering will continue to improve as ARKit continues to evolve. And we’re also able to alter the design of AR content to our specifications.

First, we must grapple with the challenge of finding the user’s precise location within a building, including their floor within a multi-story building.

It turns out that we require a minimum accuracy in AR function that equals around 10 percent of the distance between various points of the destination. To give one example, let’s say there’s a distance of 40 meters between halls within a convention center. We would require AR navigation accuracy of 40*0.1 = 4 meters. In a campus or an office building where doors in a hallway are 4 meters from one another, we’d require 4*0.1 = 0.4 meters. 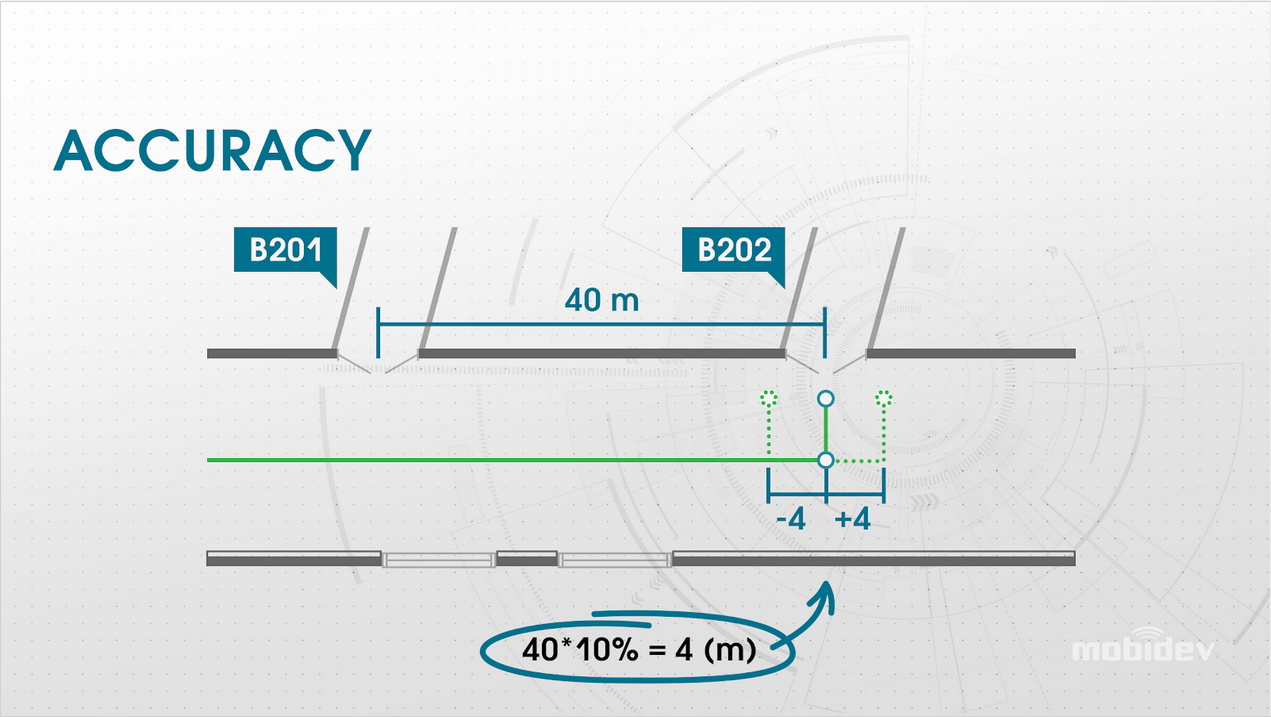 The next question is how can we get this level of accuracy?

Indoor GPS isn’t a suitable technology for this type of implementation. While it functions relatively well in low-rise buildings and larger buildings like airports, it faces a problem of determining a user’s floor level, and it requires manual selection to work properly. We can’t find the precision we need with GPS. 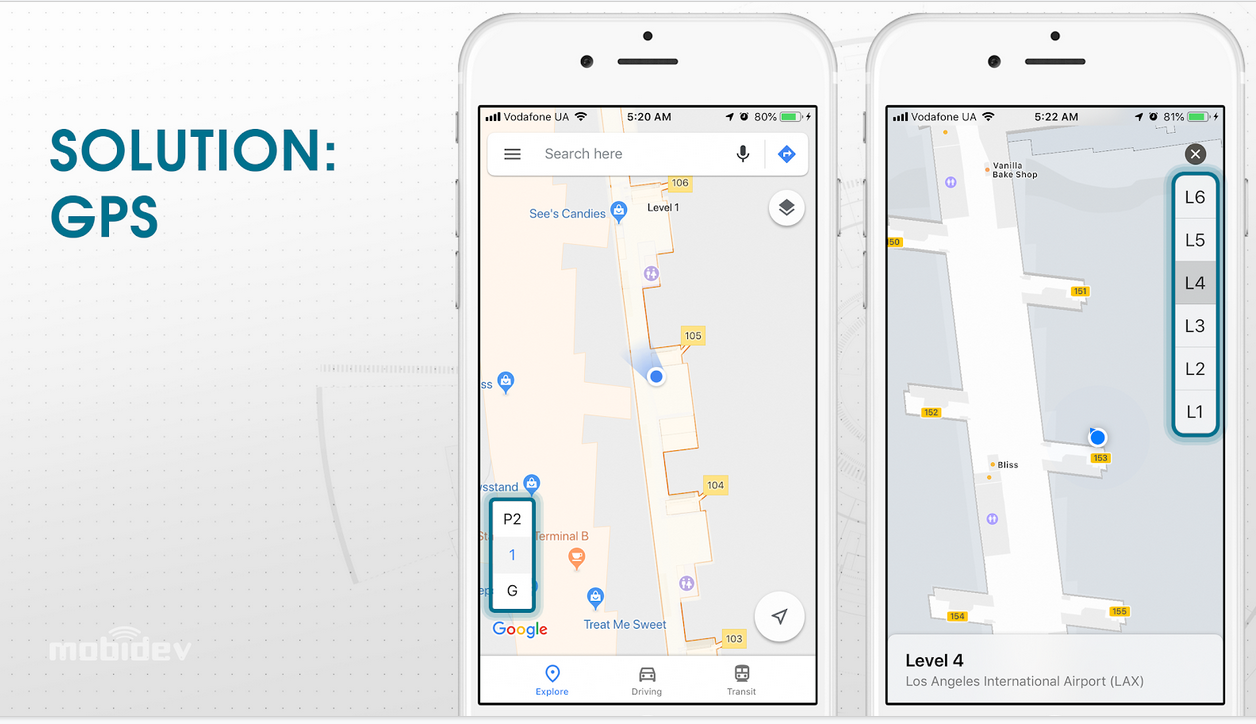 Beacons are often a technology people bring up when discussing indoor navigation. However, iBeacon documentation from Apple states that beacons are only able to provide an approximate distance, and that it’s dangerous to rely on beacon signal strength in order to calculate positioning data. 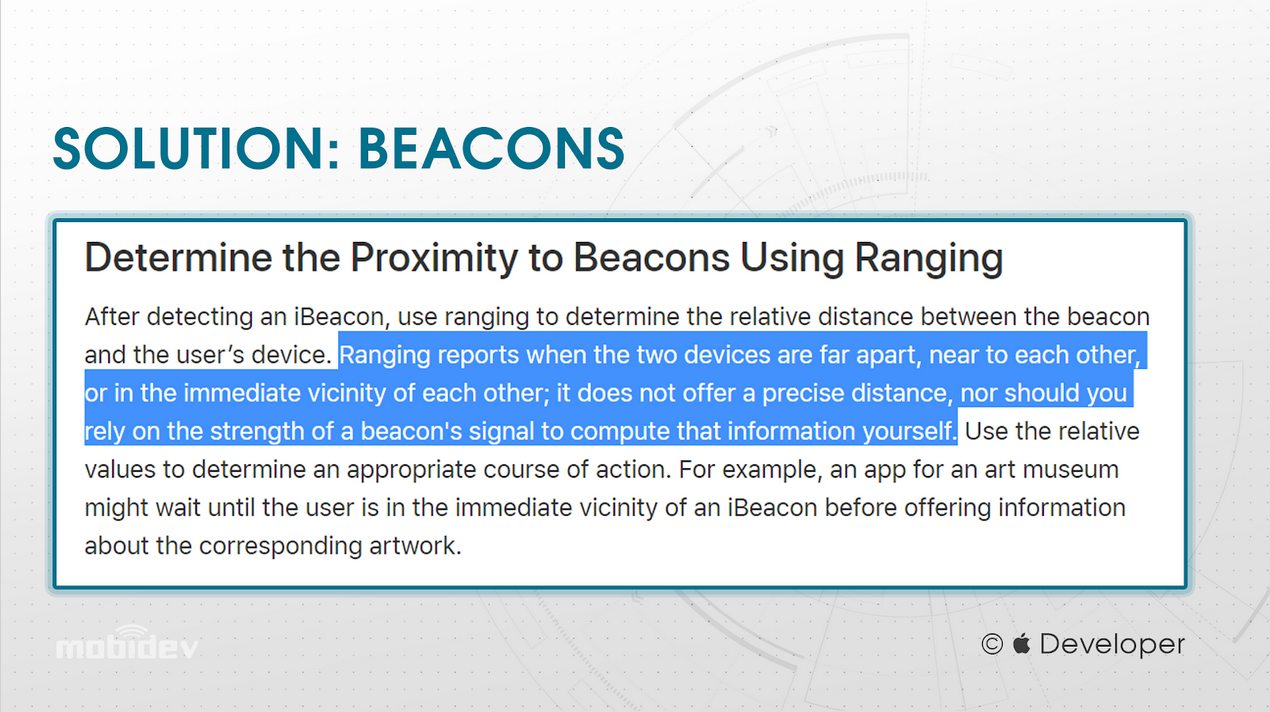 We decided to run an experiment with a few beacons: created a prototype, researched the algorithms of true range multilateration and smoothing, applied some work with the accelerometer and gyroscope. It appears that the beacons can reach around 7 to 8 meters in accuracy. With some more complicated algorithms, we reached an accuracy of 5-6 meters. However, it doesn’t appear possible to get the accuracy down any finer with the current implementation of beacon technology. 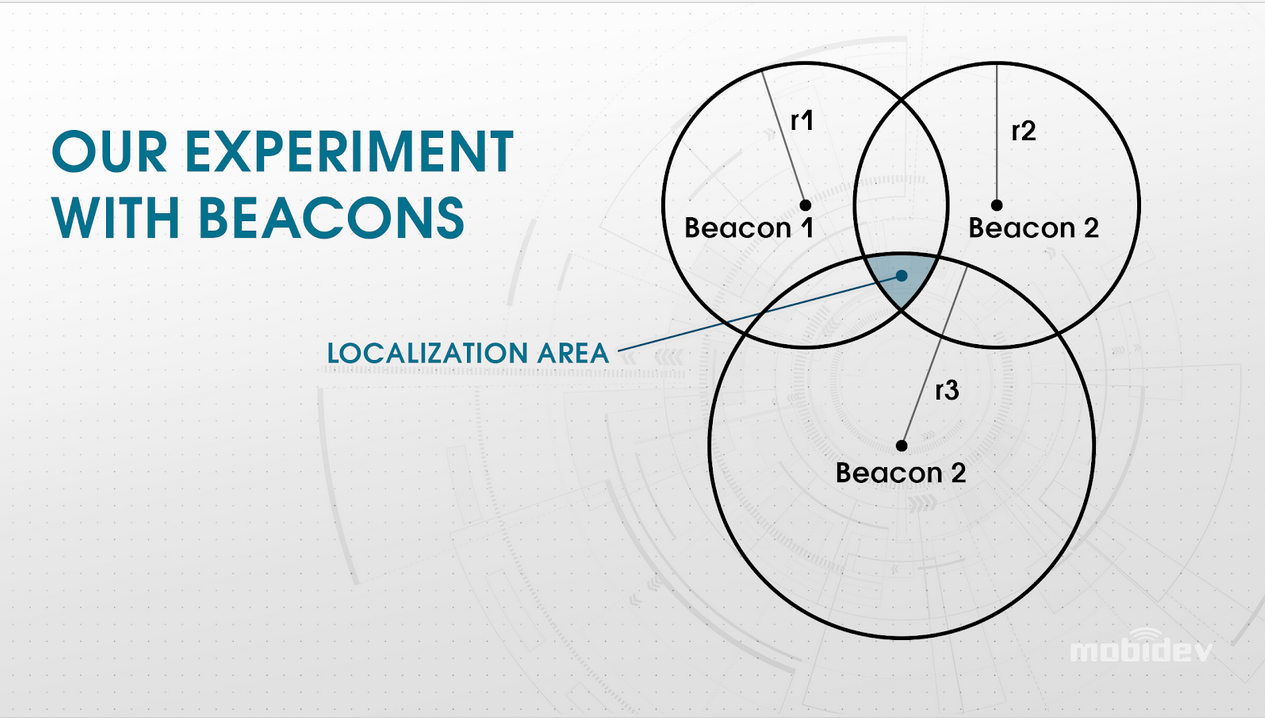 As a result, beacons don’t appear to be a viable option for AR Indoor Navigation when high accuracy of positioning information is required. Some other solution will be considered.

VPS (Visual Positioning System) is a positioning technology which shows some promise for deployment within an AR solution. Google uses Street View data for this technology, locating buildings in the area as their reference points. The ARKit 2.0 offers a class called ARWorldMap for this type of purpose. The ARWorldMap class offers a set of feature points surrounding the users that can be identified and used to determine positioning. 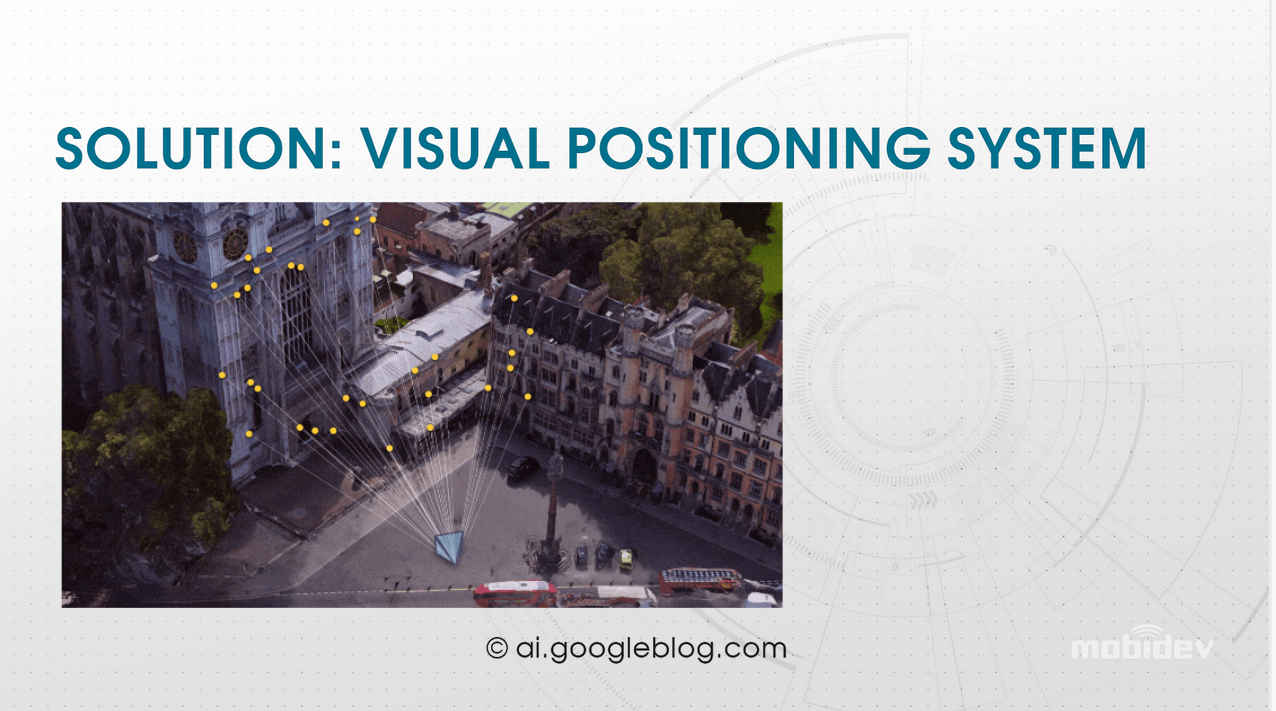 In practice, ARWorldMap is a cloud of feature points created by a scan of the surrounding area. This data is then written onto the map, and then any future launches will reference the ARWorldMap instances which had previously been saved. Once we recognize the area, we can receive accurate coordinates.

However, there are some issues with using ARWorldMap for determining the precise location of a user. First, many buildings and indoors spaces look extremely similar from a visual standpoint. It’s simply not possible to use visual cues to determine one from the other in some cases. Further, interior settings can change visually as time goes on, which ‘tricks’ the ARWorldMap. And finally, these types of calculations can be processor-intensive, making the process too slow to be relied upon.

VPS may be a solution in the future, as the technology matures. But right now, we must look elsewhere.

If a visual marker is fixed within a space, for example, on a wall or on a floor surface, this precise location can be stored in the cloud. Then, when the time comes to scan, we have the real-world coordinates of that particular location.

This type of visual marker-based positioning can deliver extremely accurate ranges. In some cases, as precise as within a few millimeters. This process is akin to VPS, so I would name it SVPS, or Simplified Visual Positioning System. The concept is similar, but we require far fewer data points in order to process locations.

The process of finding a user’s positioning via ARKit 2.0 is as follows: 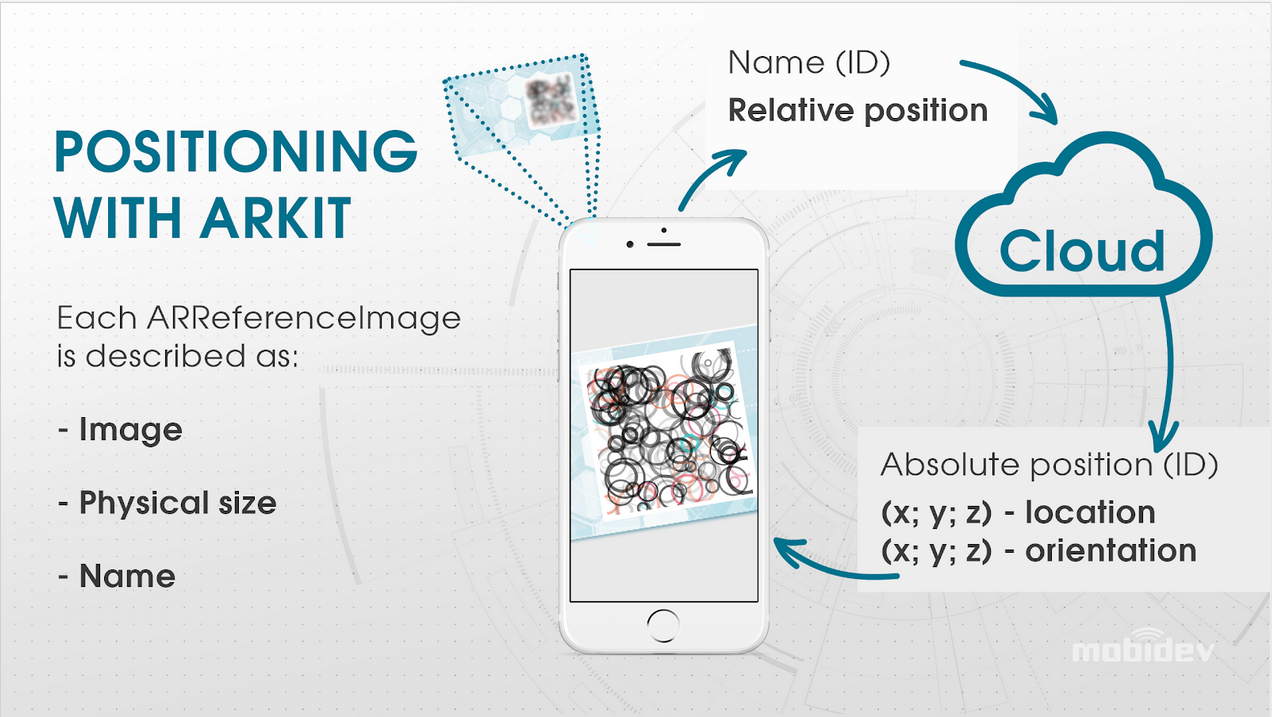 Compass is also relevant here. However, the built-in compass has a bias of around 20 degrees. 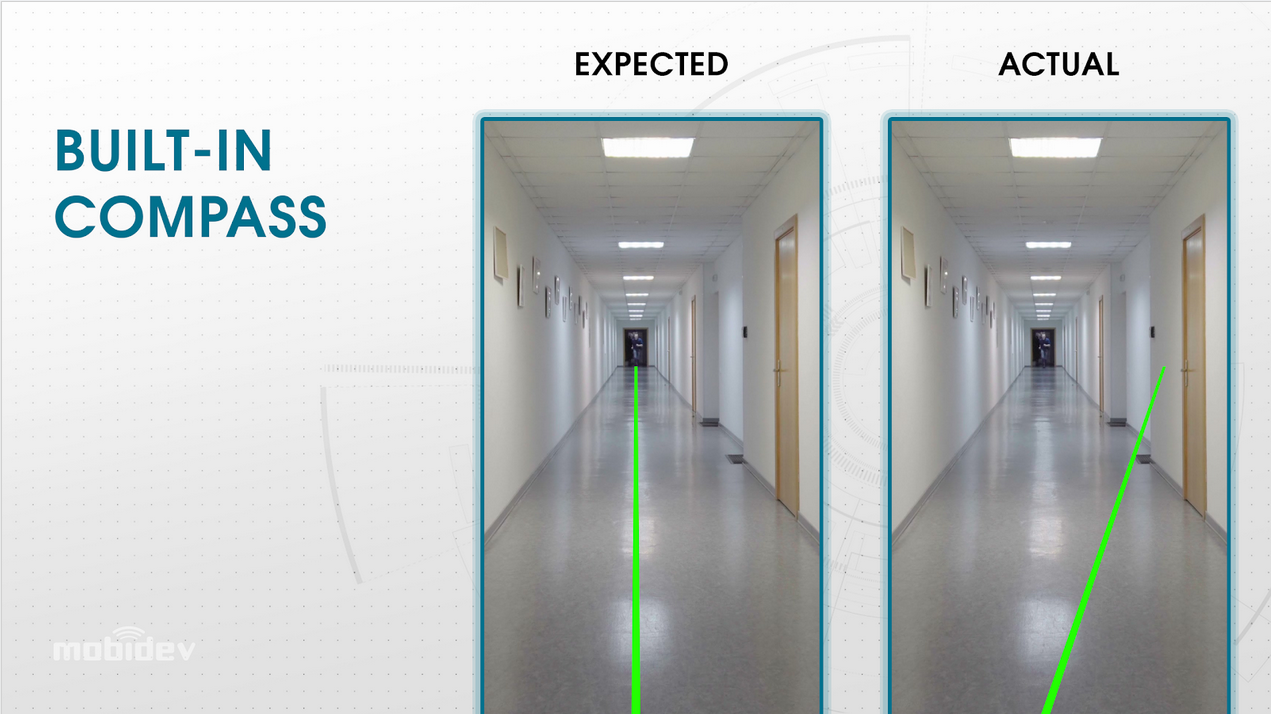 Visual markers were able to help immensely. We know the orientation and location of each of the markers within a building or other indoor location, so we are able to adjust the compass without needing any further actions or inputs from our users. 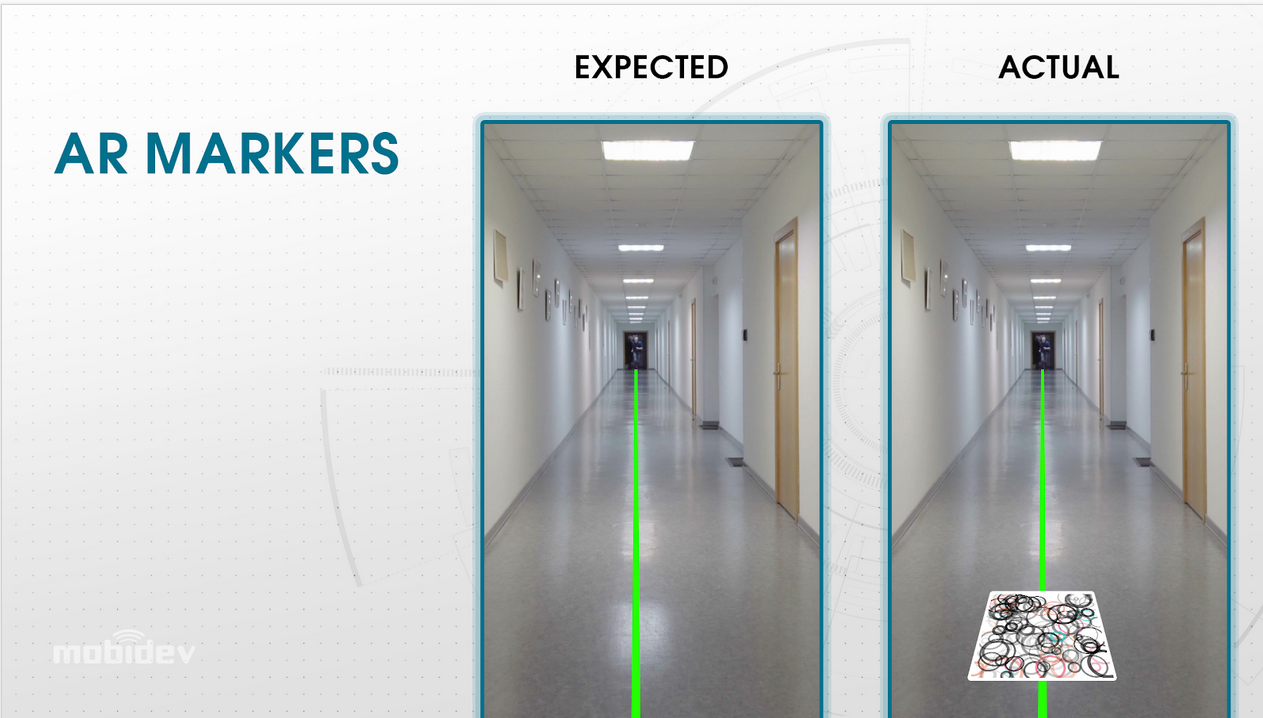 The video below explains how ARKit-based indoor navigation app works.

A drawback to using visual markers is the ARKit 2.0’s accumulative bias factor. The further we find ourselves from a given starting point, the less accurate our results will be. 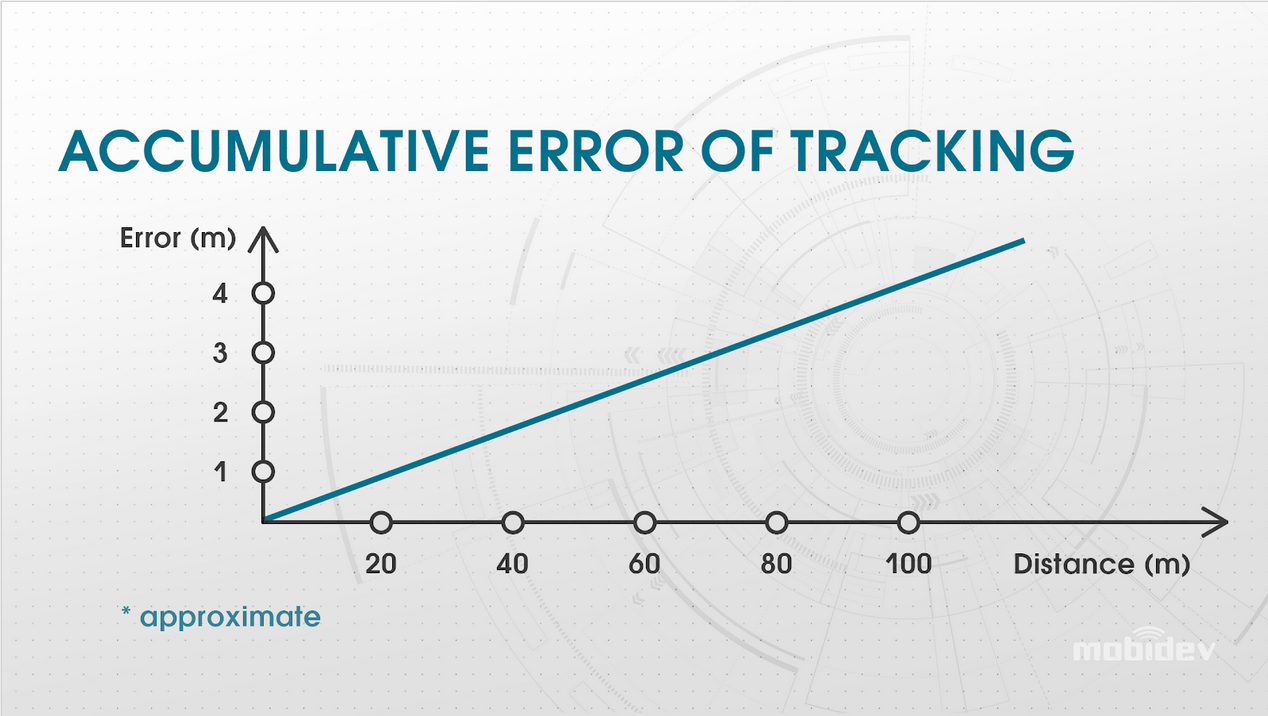 In order to solve this issue, it’s necessary to deploy additional visual markers at intervals of approximately 50 meters or so. New versions of ARKit are leading to improvements in tracking quality with each iteration as well. 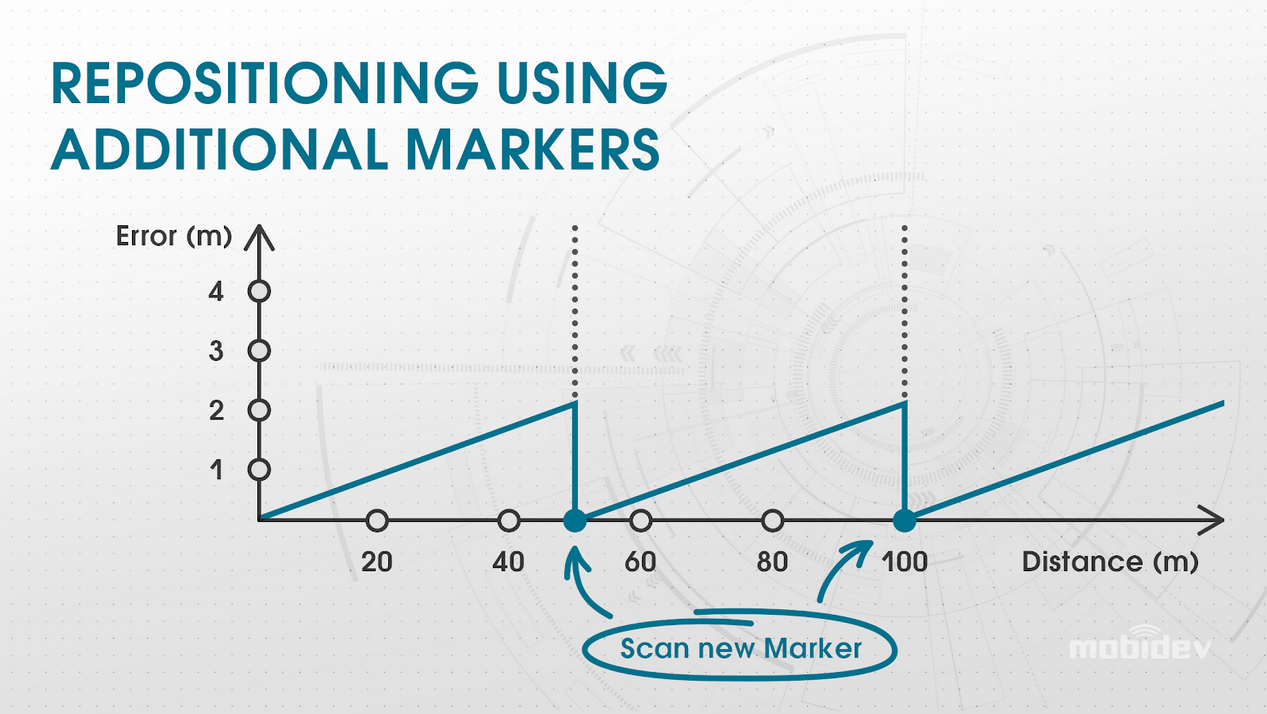 Interestingly, the initial accuracy right after we scanned the first visual marker was so high that it presented a problem.

When a person rotates, everything we calculate and render uses the smartphone as the ultimate basis. 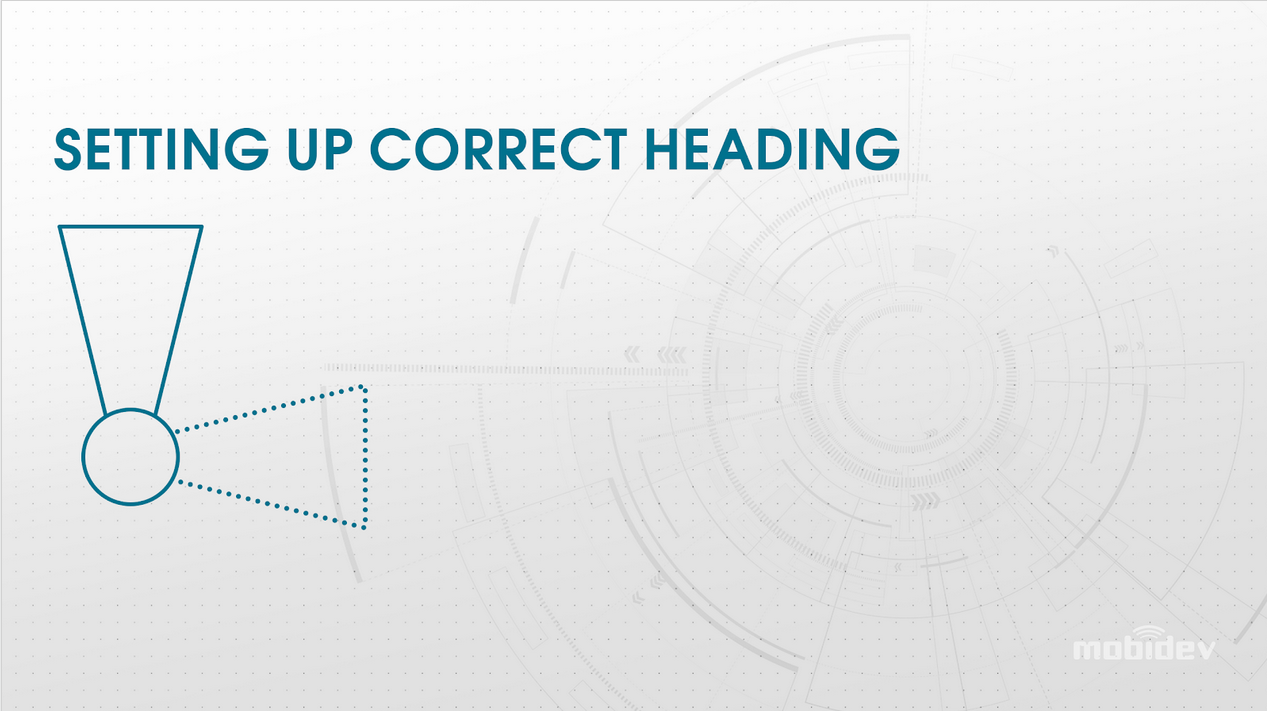 If we do this, a person rotating 90 degrees will find that the ‘location’ has shifted forward in doing so, despite them not having stepped forward. 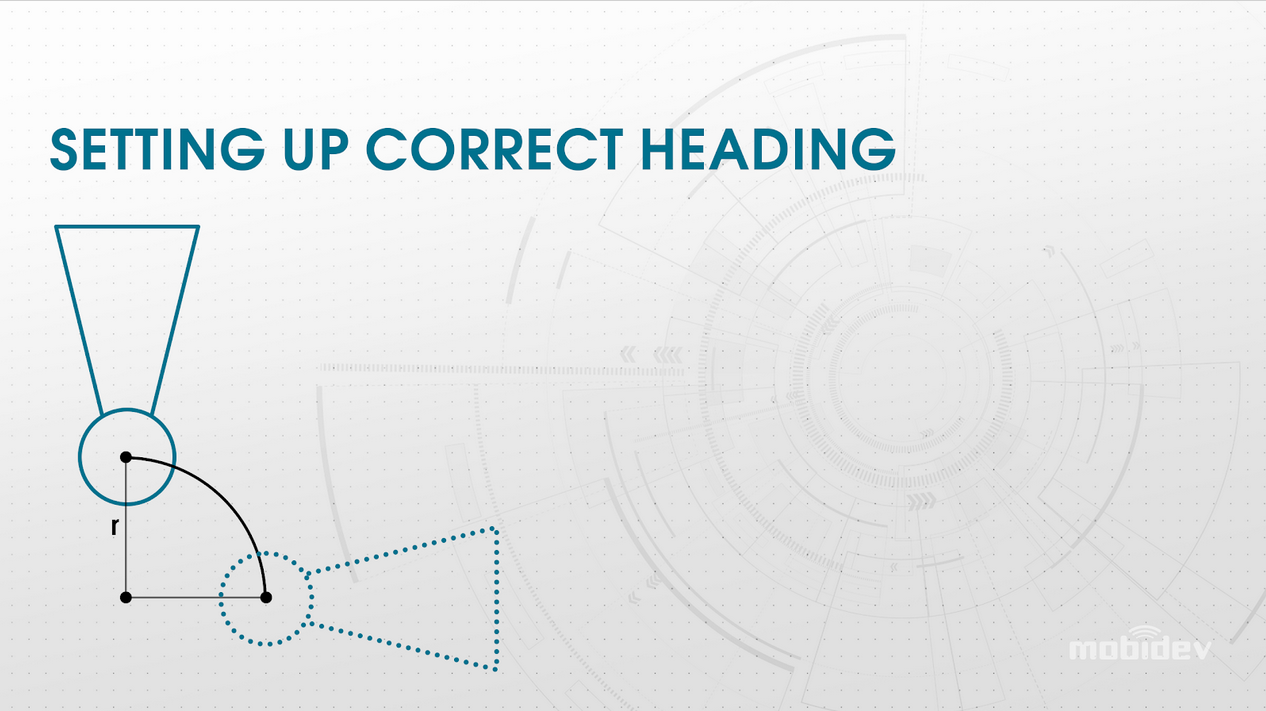 The reason this is the case is that the smartphone is extended from the center of the user’s body. So, even though the user hasn’t moved forward, the smartphone has. The rendering, in this case, is 100 percent mathematically accurate. However, it presents an odd effect on the user. 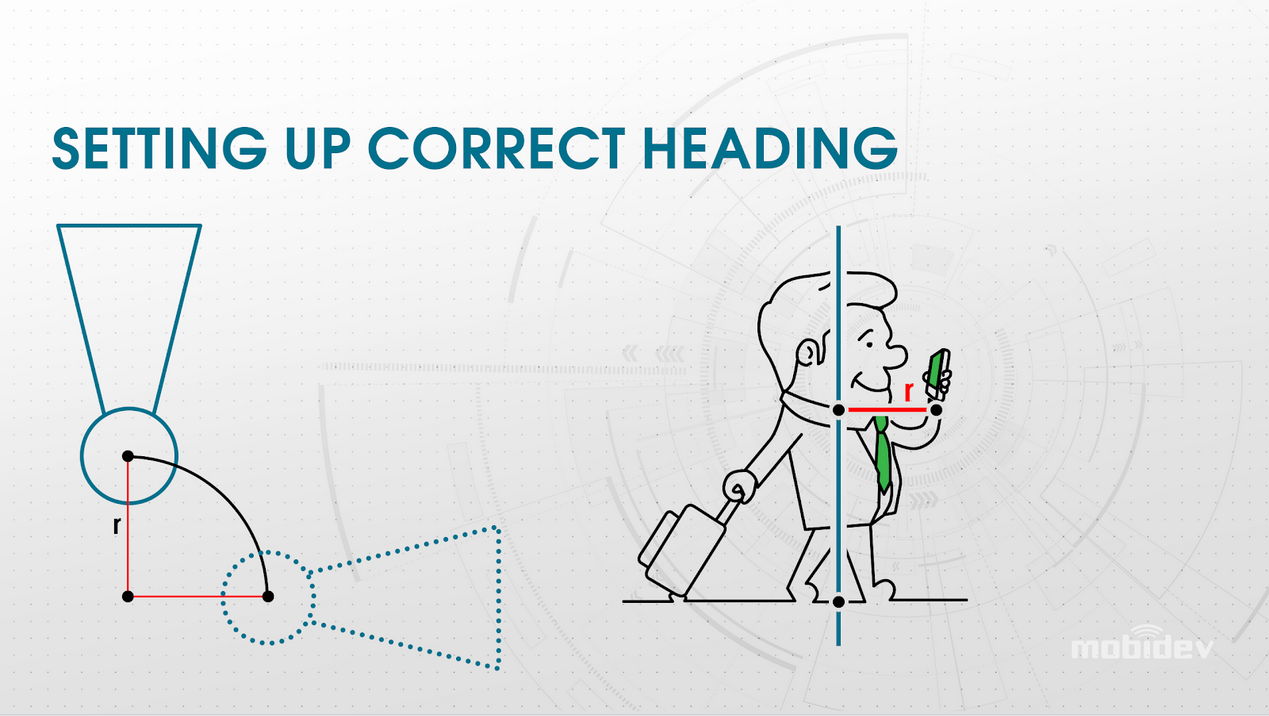 We’re able to smooth this out by shifting the coordinates a little back to the body’s axis. 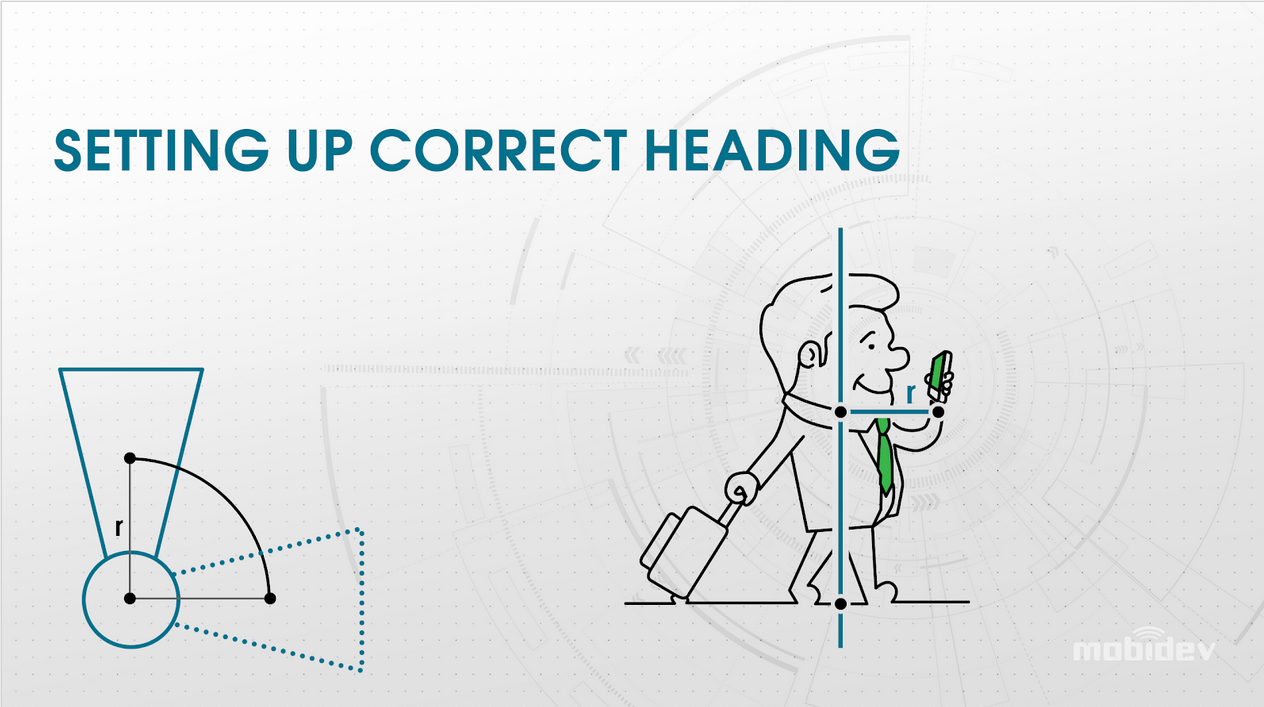 We can’t navigate without the use of a map. In some cases, we’re able to use a third-party service like Google Maps or similar services. In those cases, we can quickly and conveniently get the map we need, but the maps aren’t always existent or available for each building we might require. It’s also sometimes not possible to get the flexibility we require. Custom maps are a choice that ameliorates some of these issues.

And it’s critical to link Cartesian coordinates to geographic ones. Geographic coordinates can be obtained and aligned using satellite imaging from Google Maps. Here, it’s not necessary to determine coordinates with special accuracy, meaning we don’t need to rely on specialty equipment. This process allows for greater scalability and lets us adjust our compass based on the plan’s coordinates within space.

We avoid using bitmap images, instead storing each map as a vector image. This facilitates high performance, with the ability to zoom in while requiring a minimum of transmitted data. When designing our maps, we avoid the AR Ruler function, as its bias renders it less accurate. Instead, we use more traditional measurement tools to maximize the accuracy of all our maps. 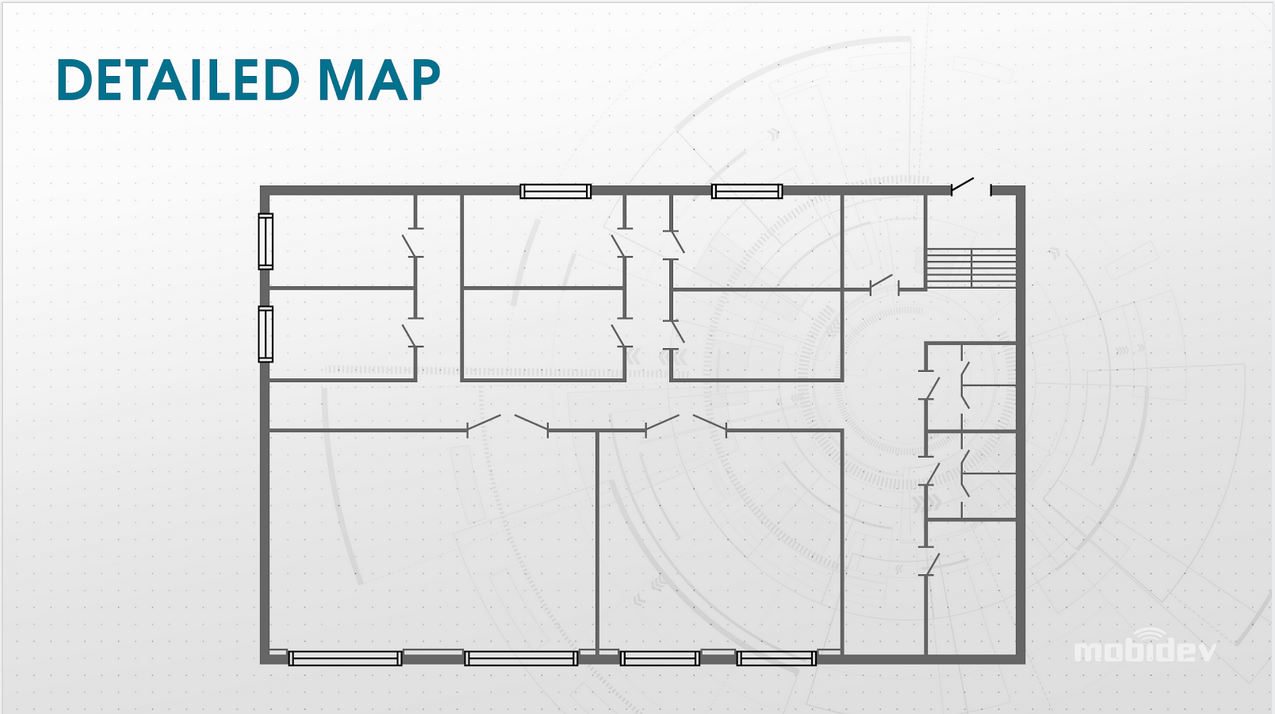 Now, we’re left with a map containing geographical coordinates with north facing up and precise physical dimensions. The next step after this is to begin to implement metadata which allows us to navigate. These are the hallways, corridors, and rooms of our interior space. This can be thought of as a graph. 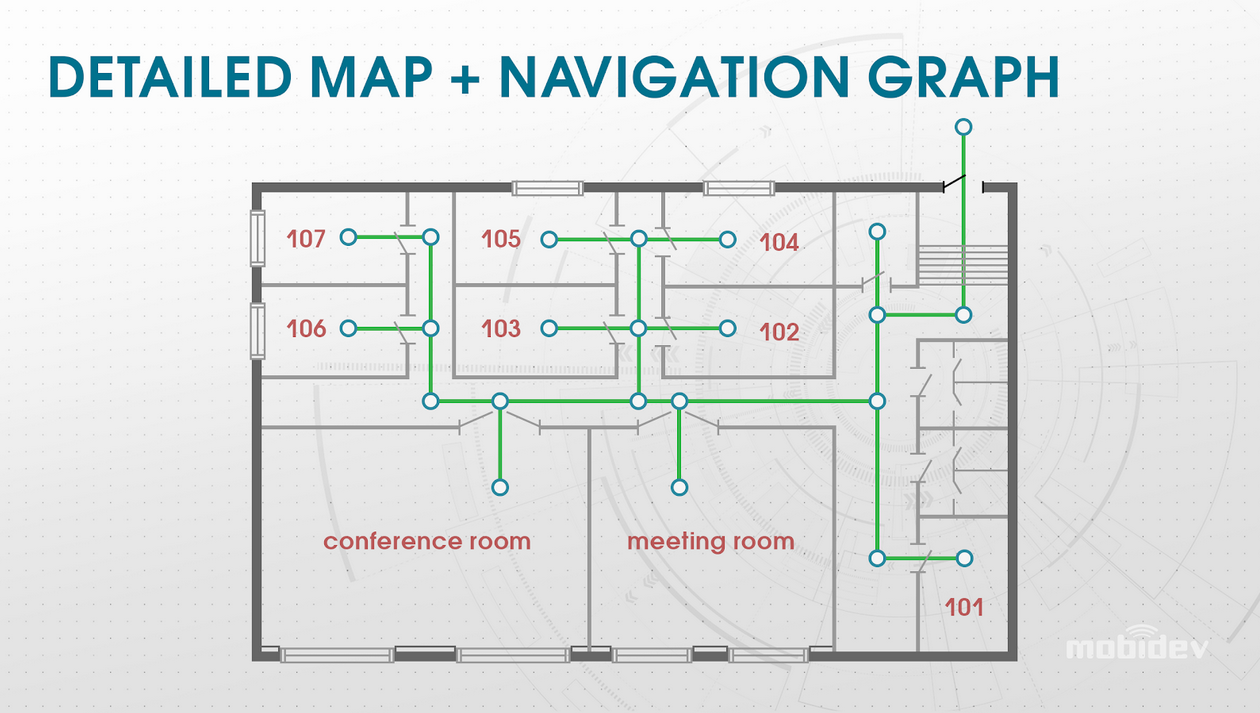 We’re now able to implement visual markers in their appropriate places, whether it be in a hallway, at the point where an elevator or escalator is located, at an entrance, or anywhere else. 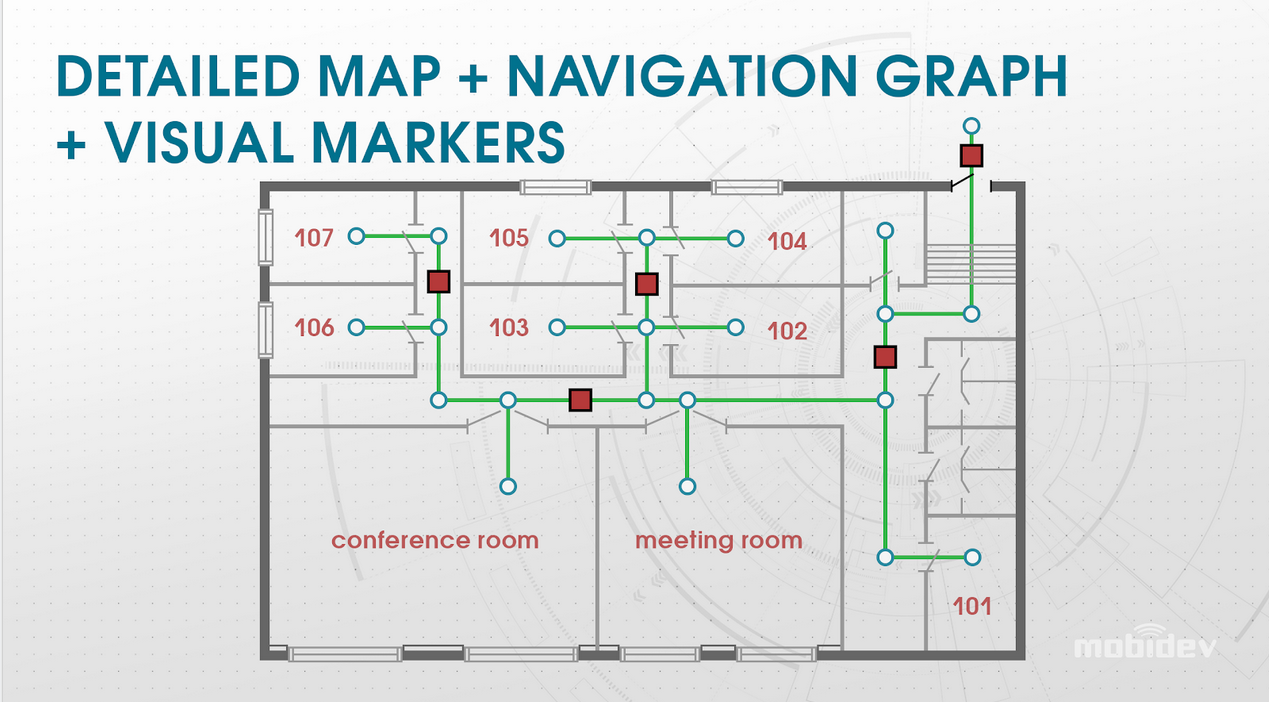 At this point, our map has almost all the data we require in order to navigate in an AR environment. However, we’re missing one big piece. Our rendered map needs to match up with the real world out there. In order to accomplish this, it’s necessary that our map contains visual markers that perfectly match the locations in the real world as specified by the plan.

An implementation of this process can be referred to as Fine Tuning and includes the following steps:

Now, we’re able to build our route through the use of graph theory. In doing so, we’ll create arrows or polyline based on our coordinates. However, there’s an issue we’ll oftentimes come up against in doing so. AR images and content are always rendered on the image we get from the camera, which allows us to create the illusion of digital content existing in the real world. But if we render the full route, it will appear to be drawn onto the walls, which creates an odd visual effect. 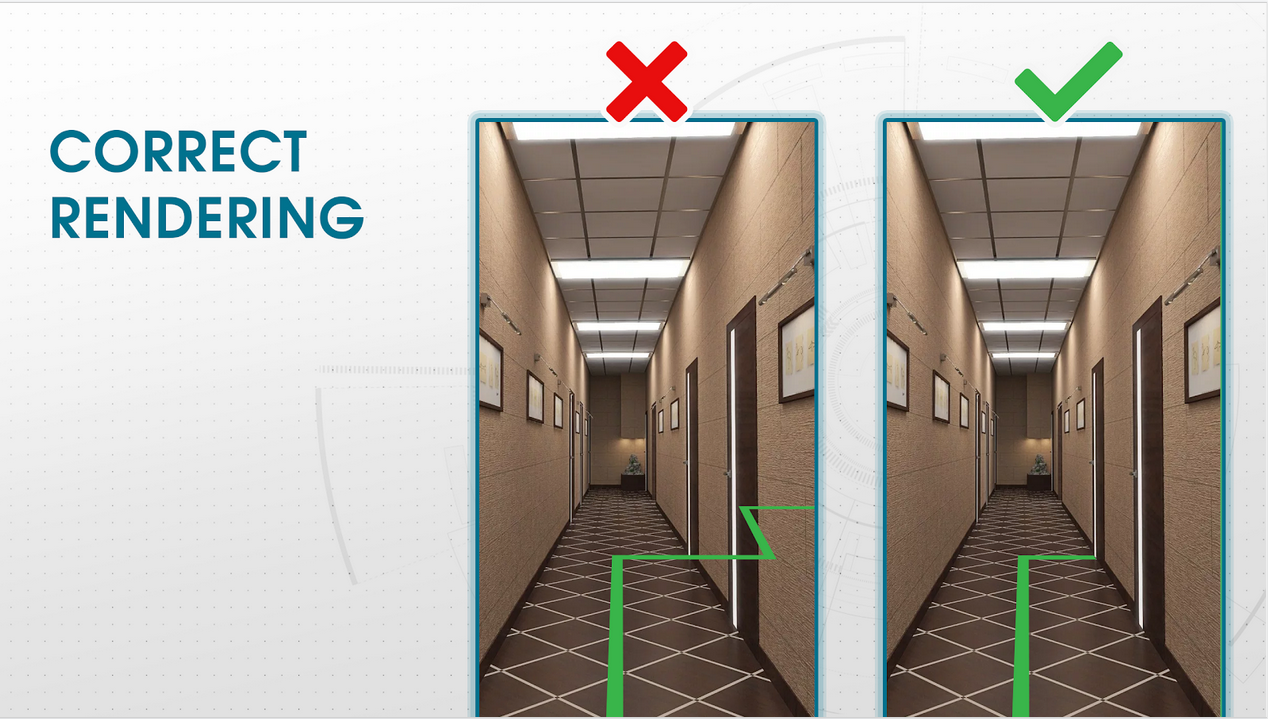 One solution is to use virtual walls. The problem with virtual walls is that inaccuracy will accumulate, causing the resulting visual output to look a bit worse than we’d optimally like it to look. 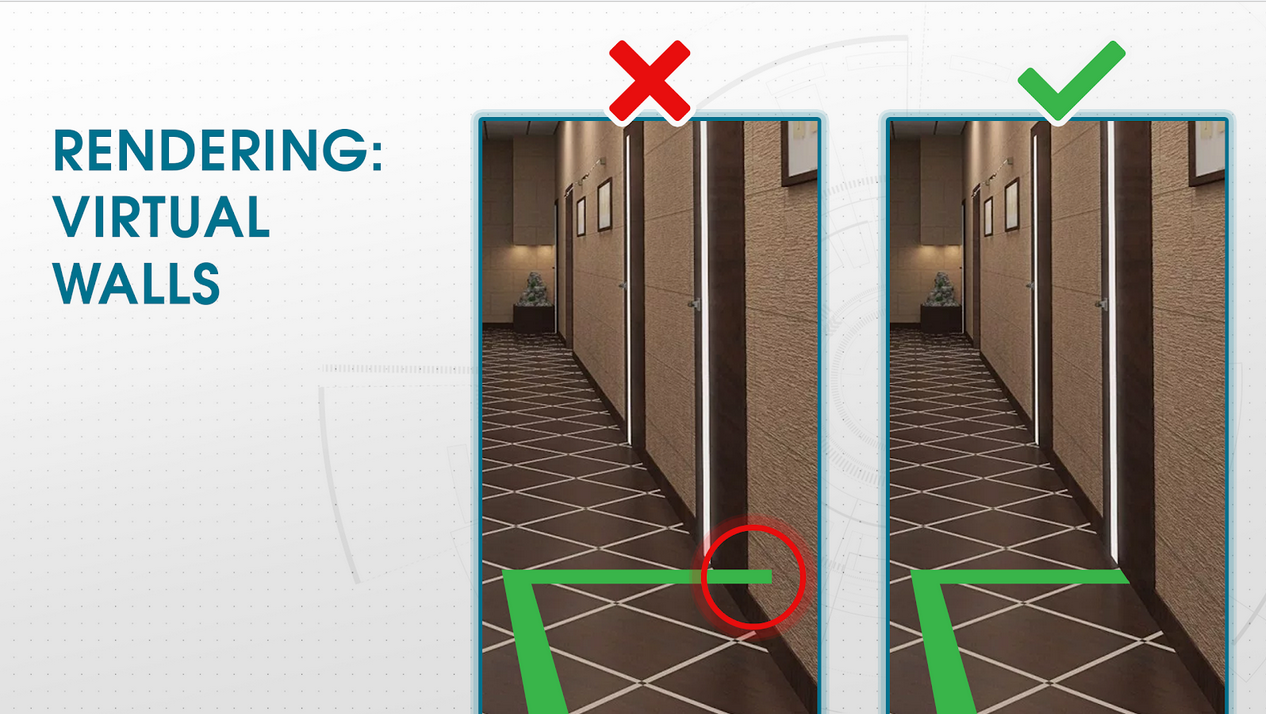 A better option is to create a route with a fadeout effect along the radius. This solution is easier to render, meaning it’s less resource-intensive, and it produces a similar if not superior results to the other options. 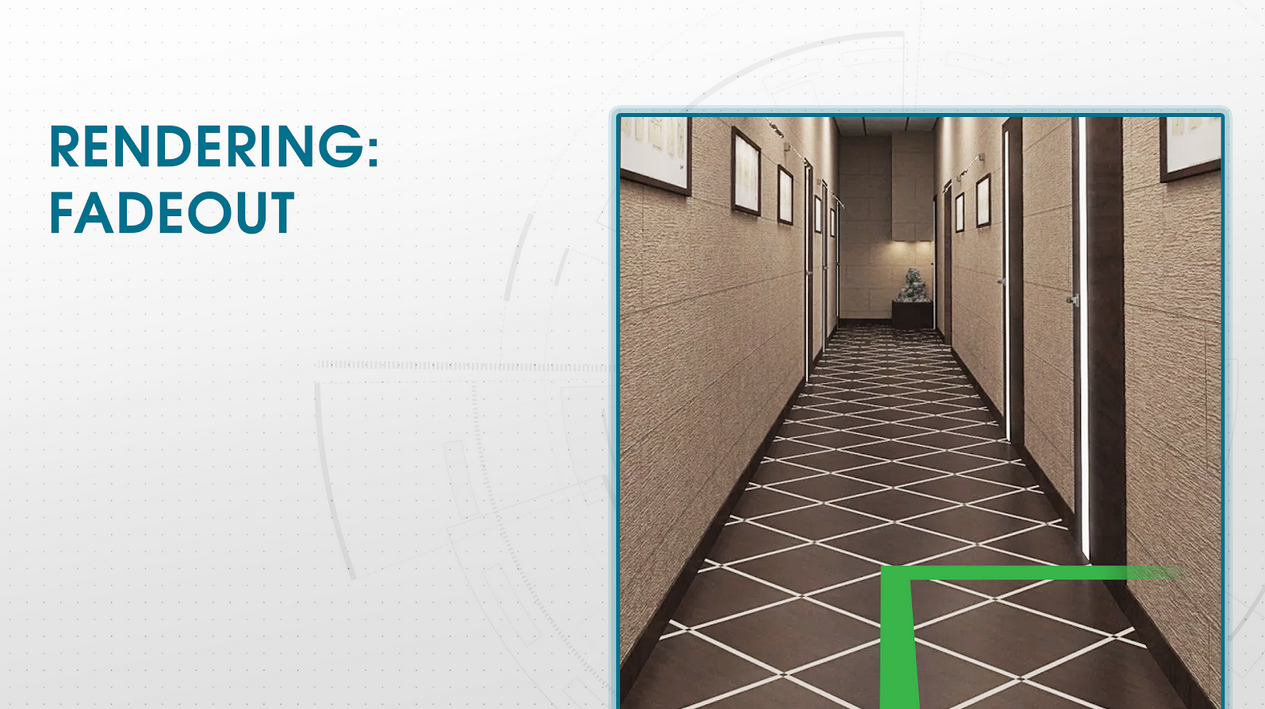 Yet another challenge we face when designing an AR solution is rendering the final pin destination so that it remains constant in size regardless of distance. It’s necessary that it be the same size so that users can easily read labels and handle touches. Normally, perspective means that objects further from the camera appear to be smaller as the distance increases. 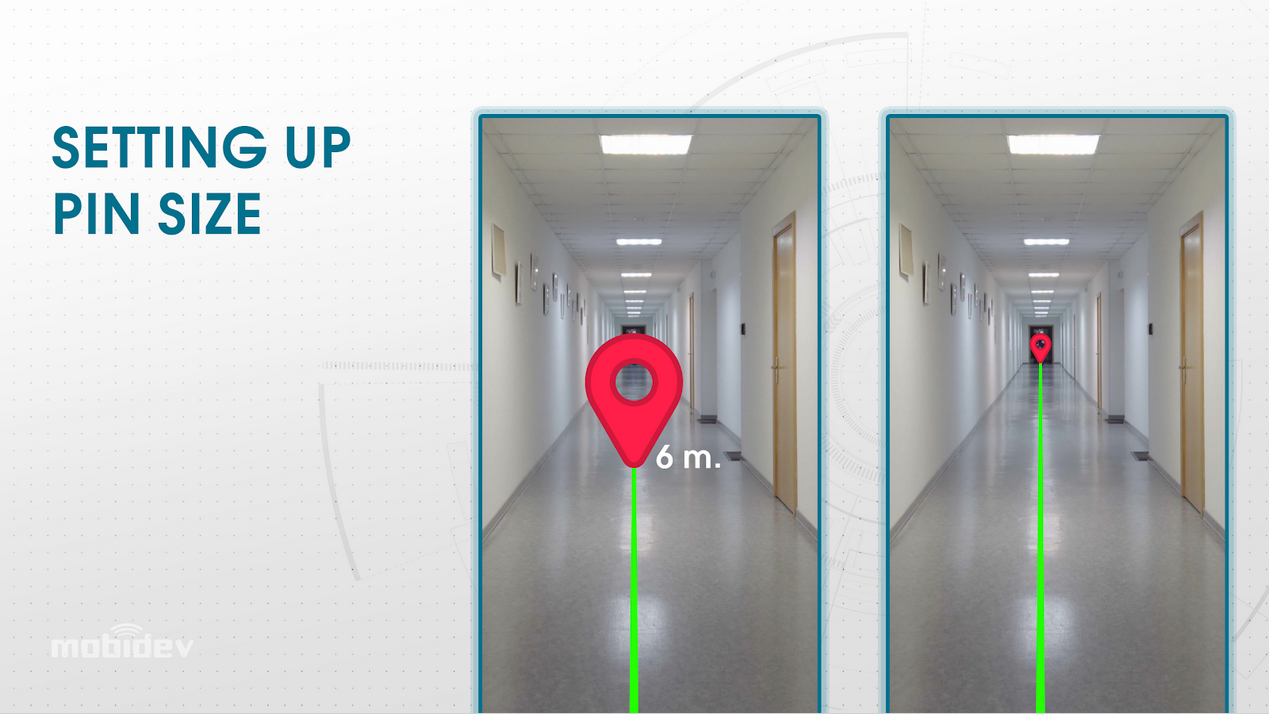 But we’re able to overcome the effect of perspective by the angular size. 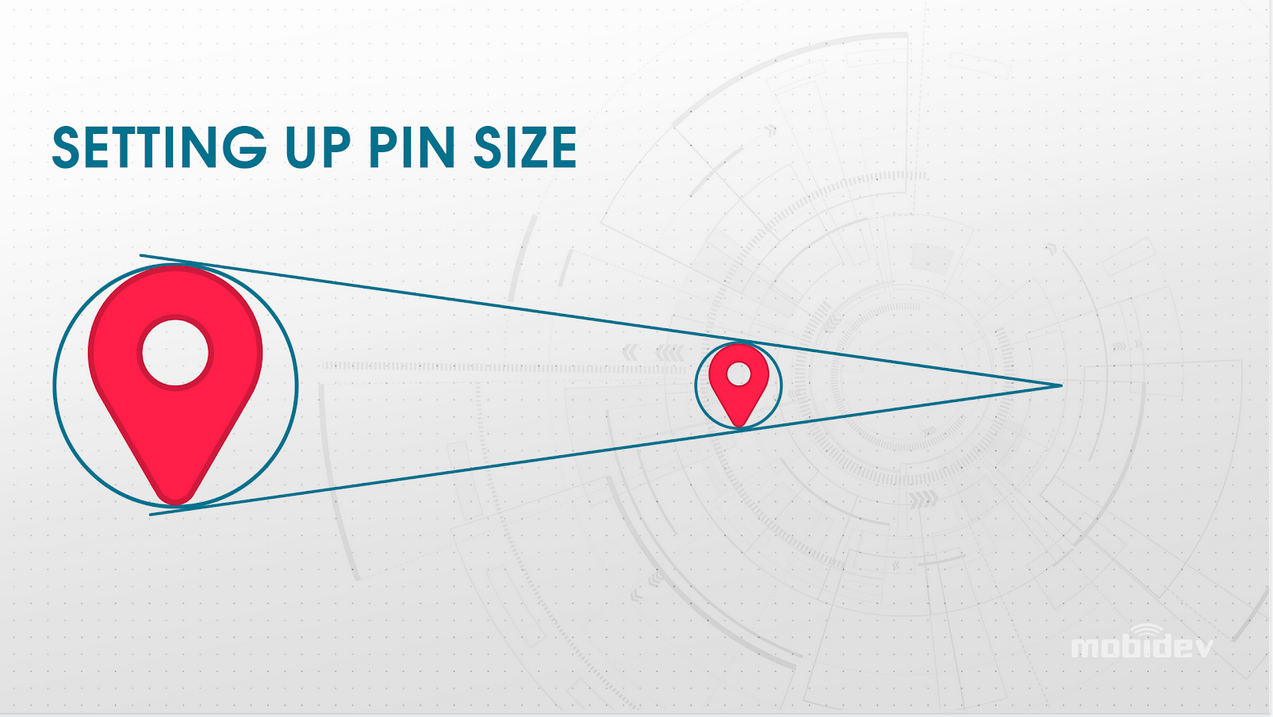 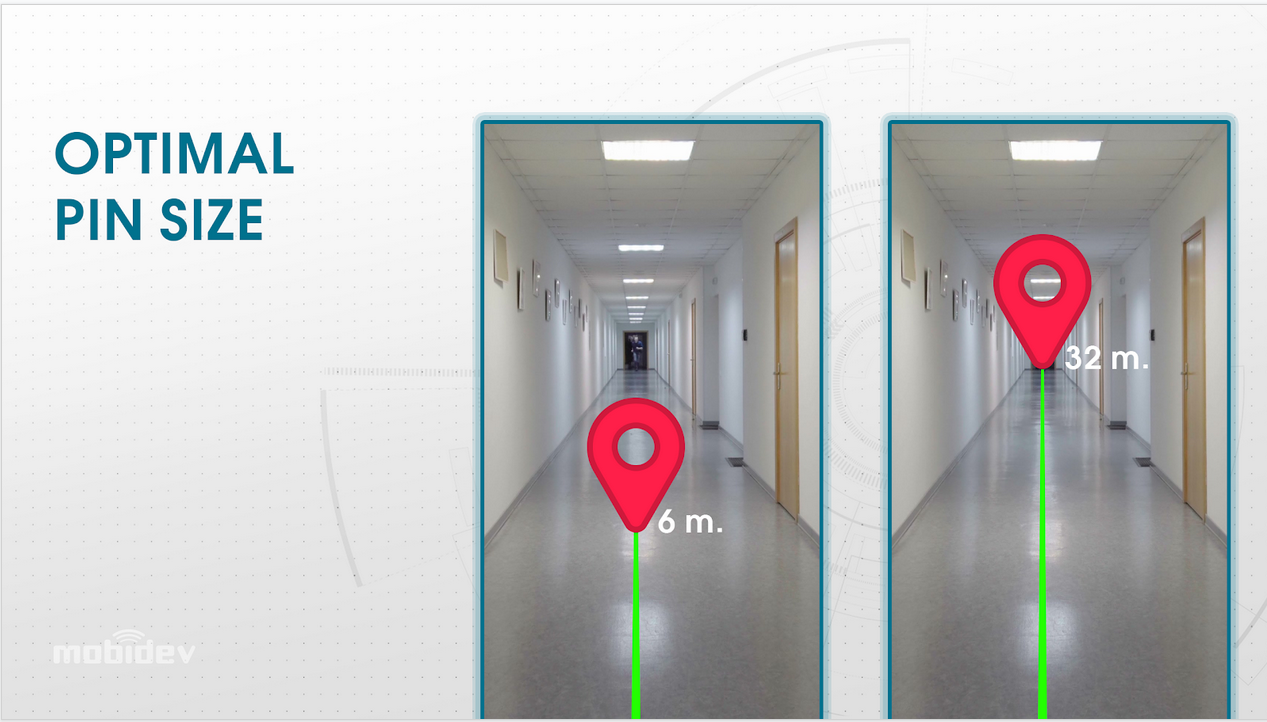 When it comes to visual markers, there are a few standard requirements.

With a smaller number of markers, there are no performance issues. But once the number of markers grows into the triple digits or higher, we can start to see major issues with processing power. This is because it’s necessary to parse through all markers to locate our matches. For simple environments, there’s no problem, but more complex real-world environments would quickly become unworkable.

Fortunately, there’s a fairly easy workaround, as we can use GPS to find our local area and only concern ourselves with the markers in the immediate vicinity at any given time. This means we can create as many maps as needed, storing them in the cloud. But we only need to access a limited number of markers depending on our location. 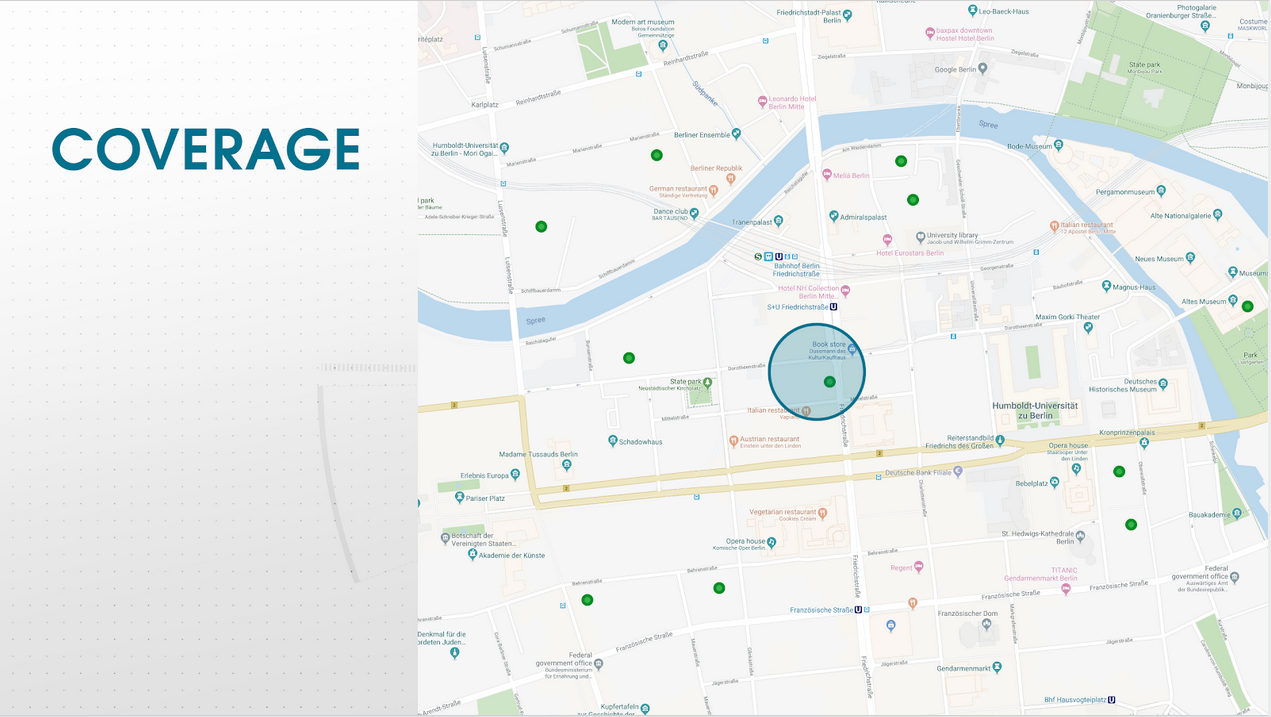 What does the future hold for AR development? We can certainly expect that ARKit will continue to grow and evolve. Recently, Apple has revealed iOS 13 and ARKit 3.0. A new iPhone with a triple camera and depth sensor is awaiting by the community this September. These types of advances will dramatically improve tracking quality.