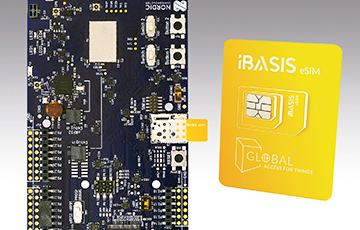 Nordic Semiconductor today announces that in conjunction with one of the world’s leading providers of communications solutions for operators and digital players worldwide, iBASIS, it has completely invalidated any question marks over cellular IoT and eSIM technology used in NB-IoT and LTE-M Low Power Wide-Area (LPWA) use cases further to successful field-testing across 30 countries using a single eSIM from iBASIS.

Nordic customers are now able to connect and monitor their LPWA devices globally on iBASIS’ Open eSIM without the logistics of deploying different SIM cards in each country. Nordic and iBASIS’ testing of iBASIS Global Access for Things™ is the first time a provider confirms standards-based cellular technologies, including LTE-M, NB-IoT, and eSIM, are now ready for massive IoT deployments.

The cellular connectivity tested is enabled on a single GSMA-compliant eSIM card. Assessments were performed configuring Nordic’s nRF9160 System-in-Package (SiP) and Nordic Thingy:91 modems via the Nordic Link Monitor application, with AT commands used to switch between different networks and select/force different bands. AT commands were also used to switch between NB-IoT and LTE-M on the same board. Where supported, Power Saving Mode (PSM) was tested, as well as IP-based data delivery in the core network together with data transfer optimization over the S11u interface for the NB-IoT use case.

This first phase of field testing was completed over six months for LTE-M and intensively over the past few months for NB-IoT. As a result of this successful phase, the connectivity solution is confirmed to be ready for general release at the end of September 2019.

“We are thrilled to announce this industry first with our partner Nordic Semiconductor,” says Ajay Joseph, CTO and Head of IoT Business at iBASIS.

“Building on the momentum of our successful integration of the industry’s only open eSIM from iBASIS with Nordic’s leading nRF91 Series cellular IoT modules, we have now demonstrated the first successful execution of LTE-M and NB-IoT cross markets with a single eSIM. This is critical to support the ever-increasing demand for seamless, turnkey cellular connectivity for LPWA devices globally.”

“This is a very exciting development for Nordic,” adds Nordic CEO, Svenn-Tore Larsen. “It’s another important step in our journey to create the absolute best customer experience by driving simplicity, flexibility and performance in all aspects of cellular IoT for the broadest array of devices deployed across the IoT ecosystem.”

“It is good to see that iBASIS is putting a lot of effort into making both LTE-M and NB-IoT work on the same SIM,” says Jan Willem Smeenk, CEO of SODAQ. “At the stage we are currently in with the international roll-out of NB-IoT and LTE-M whereby not in all countries support both networks, it is crucial to have a partner that works hard to support both network types.”

“The time for eSIM has arrived in the IoT market and we expect it to dominate future growth of IoT cellular connections over the coming years,” says Robin Duke-Woolley, CEO of specialist IoT analyst firm, Beecham Research. “This achievement of iBASIS and Nordic is most welcome and will significantly aid market growth of NB-IoT and LTE-M in the crucial high volume, low data rate segment of the IoT market.”

As iBASIS continues to test across new countries, it will provide updates on all accessible markets at: https://ibasis.com/solutions/iot-connectivity/network-coverage/

NB-IoT offers different use cases by supplying wireless connectivity to support applications requiring very low amounts of data over long periods of time such as smart water meters. For such low power devices, narrow band supports the ability to use a small amount of data followed by inactive periods that preserve battery life. NB-IoT is predicted to dominate the market with 45% of global IoT cellular connections, due to the wide variety of application opportunities and faster adoption rates in the overall ecosystem. It is expected that there will be a significantly greater number of devices and use cases along this segment in the near-term evolution of the IoT market.

LTE-M specifically refers to LTE CatM1, suitable for the IoT. LTE-M is a low power wide area technology that supports IoT through lower device complexity and provides extended coverage, while allowing the reuse of the LTE installed base, including support for VoLTE.