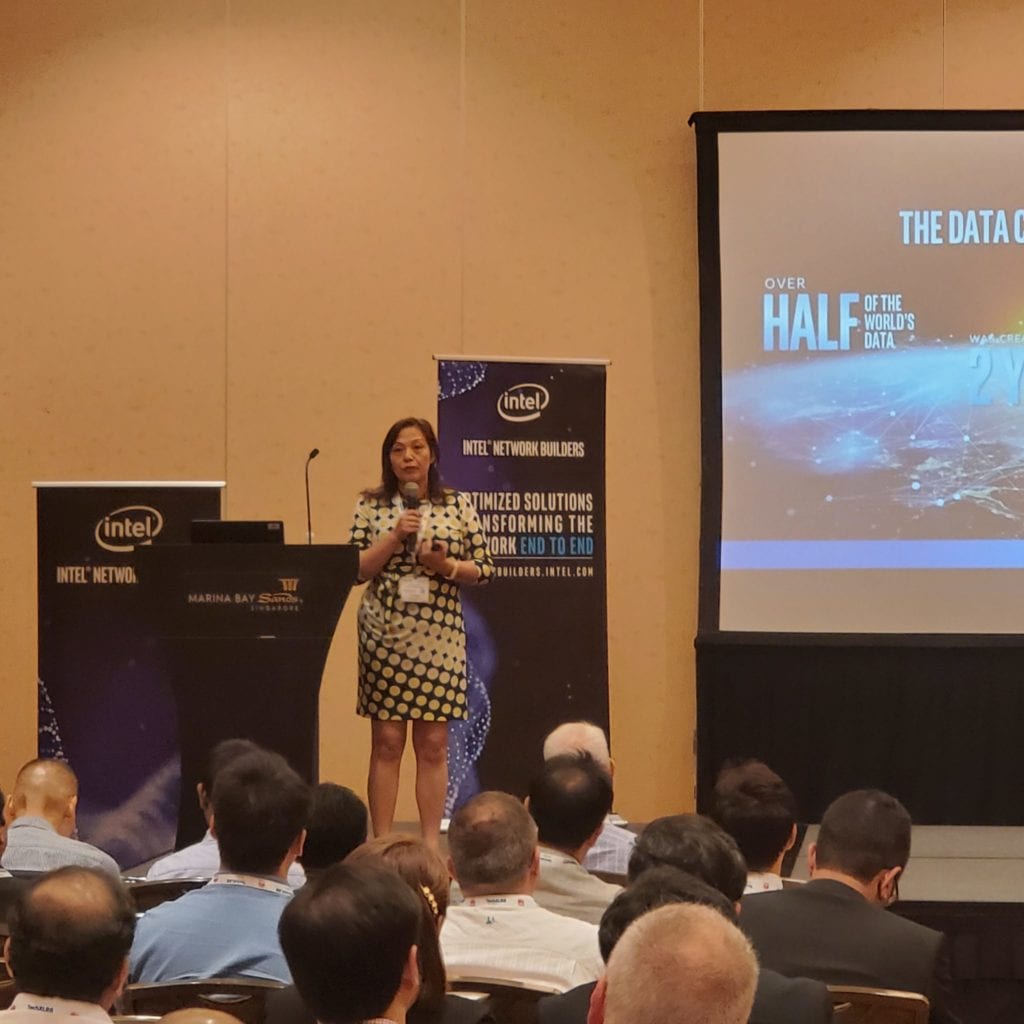 SINGAPORE–Ahead of 5G Asia, Intel’s Caroline Chan explained how the combination of 5G connectivity and edge computing will allow enterprises to tap into a wealth of unused data, gaining new levels of visibility into potential revenue-generating processes.

Chan, vice president and general manager of the 5G Infrastructure Division within Intel’s Network Platform Group, told a packed room in the Marina Bay Sands Convention Center that the vision is to create a “data-centric world,” but right now only 2% of that data, regardless of the source, is actually used.

5G is currently serving in a limited capacity to provide enhanced mobile broadband to consumers. As the standards and technology continue to evolve, the goal is to use 5G to support massive internet of things and ultra-reliable, low latency communications. That’s where edge computing comes into play.

First off, to take advantage of the latency benefits 5G opens up, compute resources have to be closer to the user–whether that’s you, me, an industrial robot or a security camera; that’s just physics. Second, in order to use data to initiate an action, you need the ability to conduct real-time data analysis. But with these edge investments, what’s the business case?

“Let’s look at how we monetize 5G and edge,” Chan said. She gave the example of a smart venue, which she characterized as a “fertile ground” for innovation that also brings a global reach as “sports transcend all cultures.”

For example, Intel worked with Arizona State University on an IoT project (LTE was the connectivity medium, but use your imagination). Sensors collected a variety of metrics for retailers in the venue. The learning: people in the cheap seats spend more money per person on not just tickets but things like food and merchandise than people who buy premium seats. “That kind of data is very valuable for people in that micro-ecosystem.”

From LTE to 5G, Chan laid out a proof of concept Intel worked on in conjunction with the National Hockey League. Following a U.S. Supreme Court decision that allowed for state-level sports gambling, the NHL wanted to explore ways to make gambling more engaging.

“The league decided to put sensors in the puck and in the athlete’s skates, collecting 4,000 data points per second. What can you do with it?”

By using 5G as a transport mechanism to feed that data into edge compute infrastructure, gambling can now be more dynamic and based on instant, real-time game stats. “It’s a scenario that really shows you what can happen if you take in real-time data, calculate with an algorithm and feed it back–all done with very, very minimum latency.’

She continued: “When you look at that whole scenario…it really shows you what can happen with a wealth of data…with real-time, that is monetization.”