Evan Cummack, Twilio’s head of IoT & Wireless, explains why now is the perfect time to jump into the Internet of Things.

Cummack led a session titled ‘The IoT opportunity right outside your door’ at this year’s Twilio Signal conference in San Francisco. That IoT opportunity, Cummack says, is creating “entrepreneurial whitespace” larger than PC, mobile, and even the web.

When just about every ‘thing’ can be connected to the internet in some way, it’s hard to dispute the entrepreneurial possibilities. Masses of data can be used in powerful and innovative new ways that were once incomprehensible.

Cummack runs through some IoT statistics: $17bn VC funding poured into IoT startups in Q4 alone, there are 20 billion single-purpose devices on the internet today, and 127 new IoT devices are connected every second.

“It’s not too early, things aren’t impossible anymore… but it’s not too late,” says Cummack. “This isn’t one of those situations where you have an idea for a mobile app, you get all excited about it, and there are already 12 companies doing it”.

Another statistic Cummack highlights is that 60 percent of all IoT device shipments right now are consumer devices. Cummack believes that’s unlikely to change, but it doesn’t matter as the sheer number of devices shipping is so huge.

The IoT space right now is dominated primarily by some very large companies like Amazon, Google, and Samsung.

“You have to understand as an entrepreneur entering this space, you will be competing against Amazon who will be making these devices, and Amazon will be pushing these devices through their retail channels and all the power they have,” warns Cummack.

‘If you can bring a problem into the world of software, you can solve it.’

Cummack talks about Uber and how, while most people wouldn’t think of it as such, it’s an IoT company in the truest sense of the term. Uber takes physical resources and links them up to the internet.

In the past, people would just hold their hands up on the side of the street and hope an available taxi would drive past. Taxi drivers, on the other hand, would just drive around hoping to find someone needing a ride.

“In software, we’d have called this a brute force algorithm; we’d just be hoping things would pan out,” says Cummack. “Wherever you see brute force like this, it’s evidence of an information gap… with the IoT, we’re able to close these.”

There are a whole load of these problems in the real-world that can now be solved using computers which couldn’t before.

Cummack quotes a colleague, Nico Acosta, who said: “If you can bring a problem into the world of software, you can solve it.”

Just a few years ago, many IoT deployments simply weren’t feasible. Some components were reserved to military-use while others were so extraordinarily expensive to obtain that it just wasn’t economic to do so at scale.

Now, many of those once-expensive components – like gyroscopic sensors, modems, and GPS chips – are in our pockets and likely multiple other devices we carry daily.

Cummack provides the example of Lime scooters which have been cropping up in cities all over the US: 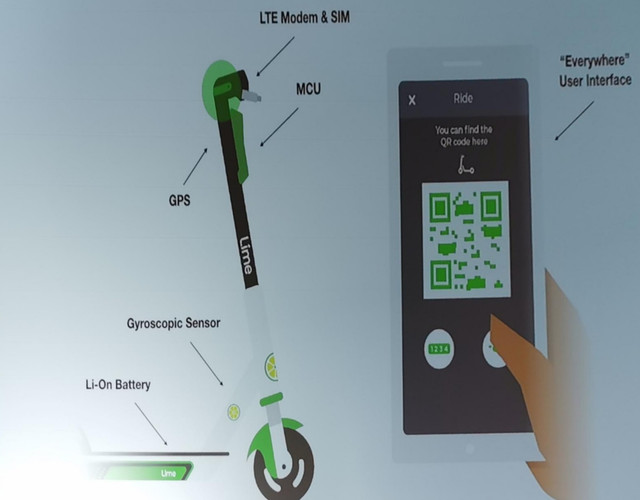 Companies getting into the industry now have the benefit of ‘peace dividends,’ a phrase coined by Margaret Thatcher and George H.W. Bush in the early 1990s. Cummack says he believes this will be the only time at Signal anyone quotes Thatcher (which your humble British reporter would be thankful for).

“Peace dividends are something which suggests that economic benefits are derived when a war is over and you convert military production into civilian production,” explains Cummack.

Chris Anderson, the head of TED talks, coined the idea of the peace dividends of the smartphone war. Now the smartphone war is almost over, and billions of smartphones were built using the many components that go into them, a lot of hardware is cheap and networks are advanced; all thanks to the investment of those large companies fighting to be on your desk and in your pocket. 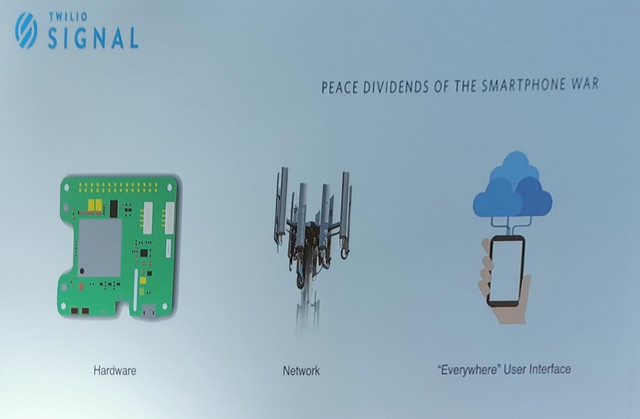 “Something really interesting happens when you look at the world as a potential developer platform,” says Cummack. “You walk down the street and see a fire hydrant and go ‘ah yeah, developer platform… I can build something for that.’”

“That’s why now is an amazing time to be an IoT developer.”