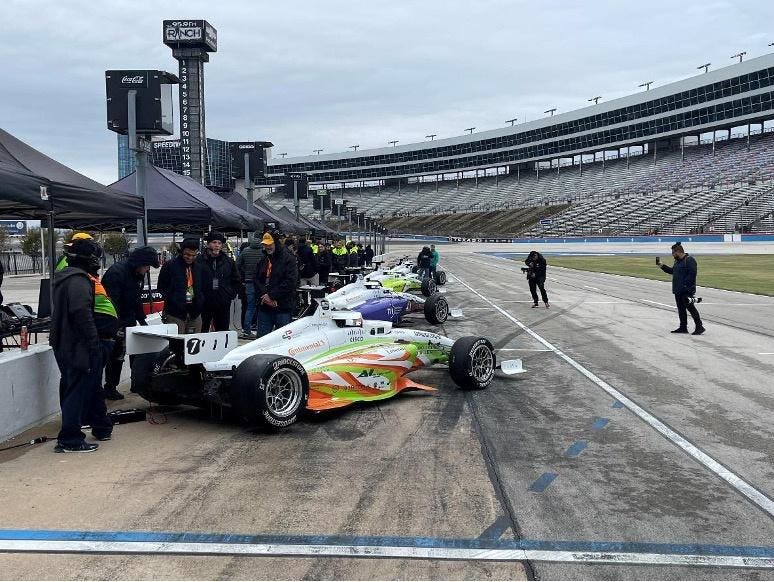 I recently attended the Indy Autonomous Challenge at the Texas Motor Speedway in Fort Worth, Texas. Cisco is the lead sponsor for the event in its second year. I want to share my experience from that cold and rainy day and provide insights regarding what I found compelling, emphasizing what’s under the hood.

The Indy Autonomous Challenge invites college-aged participants worldwide to compete for a $1.5M prize. The competition is organized by Energy Systems Network and designed to advance the technology necessary to speed the commercialization of fully autonomous vehicles and advanced driver-assistance systems (ADAS). What I found super cool was the use of full-sized, chassis-modified Indy-class race cars outfitted with lidar, radar, optical cameras, various sensors, ruggedized edge computing, and high-speed communications gear. The official name for the vehicle is the Dallara AV-21, and if you want to learn more about its inception and design, you can find those details here.

I had the opportunity to speak to the event director, Paul Mitchell, to learn more about the inspiration behind the competition. Mr. Mitchell points to three strategic objectives. First, the previously mentioned desire to accelerate (literally and figuratively) the development of ADAS and autonomous vehicles with a focus on high-speed automation. Second, to solve autonomous mobility challenges, attract the best and brightest minds in artificial intelligence, robotics, and automation worldwide. Third, increase public awareness and instill excitement in students in science, technology, engineering, and mathematics (STEM) degree programs for the future of autonomous mobility.

Autonomous mobility is a much-ballyhooed 5G use case, and there are multiple stages to reaching the end goal of fully autonomous driving. However, the operational technology (OT) applications for what the event and lead partner Cisco are facilitating through the event are further reaching into manufacturing, logistics, port and mining operations, and more. Key is a broad and deep Cisco IoT portfolio that provides the necessary infrastructure, and from my perspective, it’s the star of the show, in addition to the students.

Cisco IoT infrastructure under the hood

I spent time with Cisco executives at the event that all work within Vikas Butaney’s organization. Mr. Butaney is Cisco’s Chief Product Officer, Vice President, and General Manager for Cloud Connectivity and Industrial IoT Networking. I’ve had the pleasure of knowing him for several years, and the depth and breadth of the IoT portfolio he and his team have built are impressive. With that said, I had no doubt that Cisco’s IoT muscle was fully flexing at the Indy Autonomous Challenge. The company powers the in-vehicle networking and connectivity to and from all race cars to ensure safety, telemetry data offload, and GPS timing alignment. The latter includes Cisco Ultra-Reliable Wireless Backhaul for connectivity in motion. Cisco Catalyst Industrial Ethernet Switches are integrated into each Indy car to connect in-vehicle sensors and the onboard edge computing platform.

The ongoing event series is an impressive showcase for the power of Cisco’s IoT capabilities and a fantastic talent recruitment tool for the networking giant. In one of the garages adjacent to the raceway, Cisco also promoted its Networking Academy program, which recently celebrated an astounding 25th anniversary. The “IT skills-to-jobs” focus involves private-public partnerships supporting the company’s broader corporate social responsibility (CSR) initiatives to ensure global inclusion. I applaud Cisco for investing in the program and providing people of all ages the opportunity to reskill for higher wage-paying jobs, especially in the current economic climate.

The Indy Autonomous Challenge and Cisco’s involvement is advancing the future of autonomy and recruiting and training both present and future OT operators. Watching the race from a warmer suite high above the Texas Motor Speedway brought to mind one of my favorite movies. To quote the immortal Ricky Bobby in “Talladega Nights” – I wanna go fast! Cisco wants to make it autonomous too!

Note: Moor Insights & Strategy writers and editors may have contributed to this article.