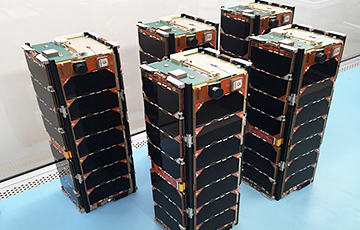 Astrocast today announces the signing of a new contract with Spaceflight for the launch of 10 additional IoT nanosatellites.

In total, Spaceflight is now set to launch 30 of the 100 satellites that will complete the Astrocast IoT Nanosatellite Network. The launch of the satellites is expected to take place in late 2021.

“Spaceflight was founded to provide cost effective, reliable rideshare launch services for smallsat companies, such as Astrocast,” said Curt Blake, CEO and president of Spaceflight. “We are excited to continue our partnership with Astrocast as both our companies strive to expand accessibility of an innovative service.”

Today only 10% of the earth has access to terrestrial communication networks. However, IoT devices in the remotest areas still need the ability to establish two-way communications to send data such as status information and updates. Astrocast’s IoT Nanosatellite Network of 100 CubeSats is specifically designed to transmit and receive low bandwidth data from IoT devices anywhere in the world. Whether a marine buoy in the deep sea or water purification station in the world’s most remote village, Astrocast will allow companies to exchange data with millions of devices around the globe.

Astrocast will be the first IoT nanosatellite constellation to deliver:

“Access to space is the number one challenge for this industry. Astrocast is at an accelerated phase in company growth where it is critical to have experienced partners deploying our constellation,” said Kjell Karlsen CFO of Astrocast. “Spaceflight has proven to be a reliable partner from our very first launch. We couldn’t ask for a better launch and mission management service.”