A well-known Arduino function is delay(), which pauses the program for a number of milliseconds specified as a parameter.

millis(), on the other hand, is a function that returns the number of milliseconds that have passed since program start.

You may also like: Learning to Crawl: My First Experience With an Arduino

At first glance, you may doubt the usefulness of this function. The fact is, however, that it’s extremely useful in many scenarios, often “replacing” delay() completely. Let’s first look at how we can use millis() almost exactly like delay().

If you want your code to just pause for 1000 ms at the end of each loop iteration, the code above is a bit silly. You can just use delay(1000) instead.

Why Use millis() Instead of delay()?

We will now look at two advantages with millis() compared to delay().

The first advantage we’ll discuss is accurate timing. Code-wise, we covered this in the last section. With millis(), we can ensure that the loop runs as often as we want, regardless of the execution time (obviously, as long as the execution time is less time the desired period). With delay(), this is not possible since we do not know how long the loop execution time is.

Accurate timing like this is very useful when sampling at a certain frequency or running filters, among other things.

The other advantage with millis() is that it won’t prevent us from running code while “waiting”.

Let’s say we want to print “Hello” over serial once each second while doing other stuff in the meantime. This is not possible with delay(), since it pauses the entire code. Here’s one way we can do this:

This chunk of code is pretty similar to the first chunk, except that it doesn’t block the rest of the program when not printing over serial.

Let’s write a simple example where we create a scheduler that prints certain bits of text at different intervals.

Here’s what the first 60 seconds in the serial monitor look like: 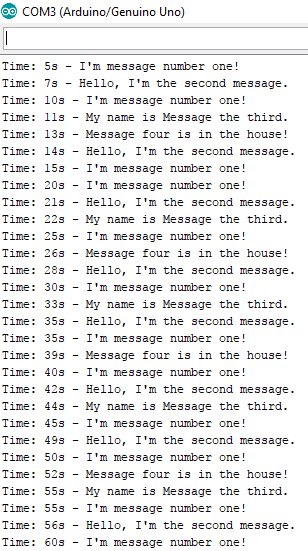 This is a nice and easy way to synchronize executions in your code. You are able to run other code simultaneously as well.

Just like delay() has a microsecond-version called delayMicroseconds(), millis() has micros(). If you need better resolution, micros() may be the way to go.

However, be aware that micros() will overflow after approximately 70 minutes, compared to millis()‘s 50 days. This means that the functions’ return values will start all over from zero.

millis() and micros() are really handy functions to use when dealing with timing tasks. If you’re not aware of these, you might end up using delay() instead, which won’t always work that well (if at all).

Learning to Crawl: My First Experience With an Arduino