We take a look at some of the trends in the AR & VR ecosystem, focusing on the main differences between developers and non-developers active in this space.

Considered individually, Augmented Reality and Virtual Reality remain the smallest software sectors out of the ones we research (the others being mobile, desktop, web, games, backend, industrial IoT, consumer electronics, data science & machine learning). Even when combined, AR and VR (AR/VR) is only marginally bigger than Consumer Electronics, the next smallest sector. Only 0.4% of people are involved solely in AR or VR, the rest are involved with at least one other development area.

Of the 9% of people involved with AR or VR, almost half (46%) are involved with both AR and VR. This shows that there is a significant overlap in the skills needed to work in these sectors. There are more people involved solely with VR (31%) than with AR (24%). AR is slightly less mature than VR and there are some technical challenges in AR (occlusion, optics & object registration, for example) which are still being resolved, this also means that there is a smaller market for AR products, as the technology is less established. This results in a slightly higher barrier to entry and subsequently a smaller number of people involved in AR than for VR only. 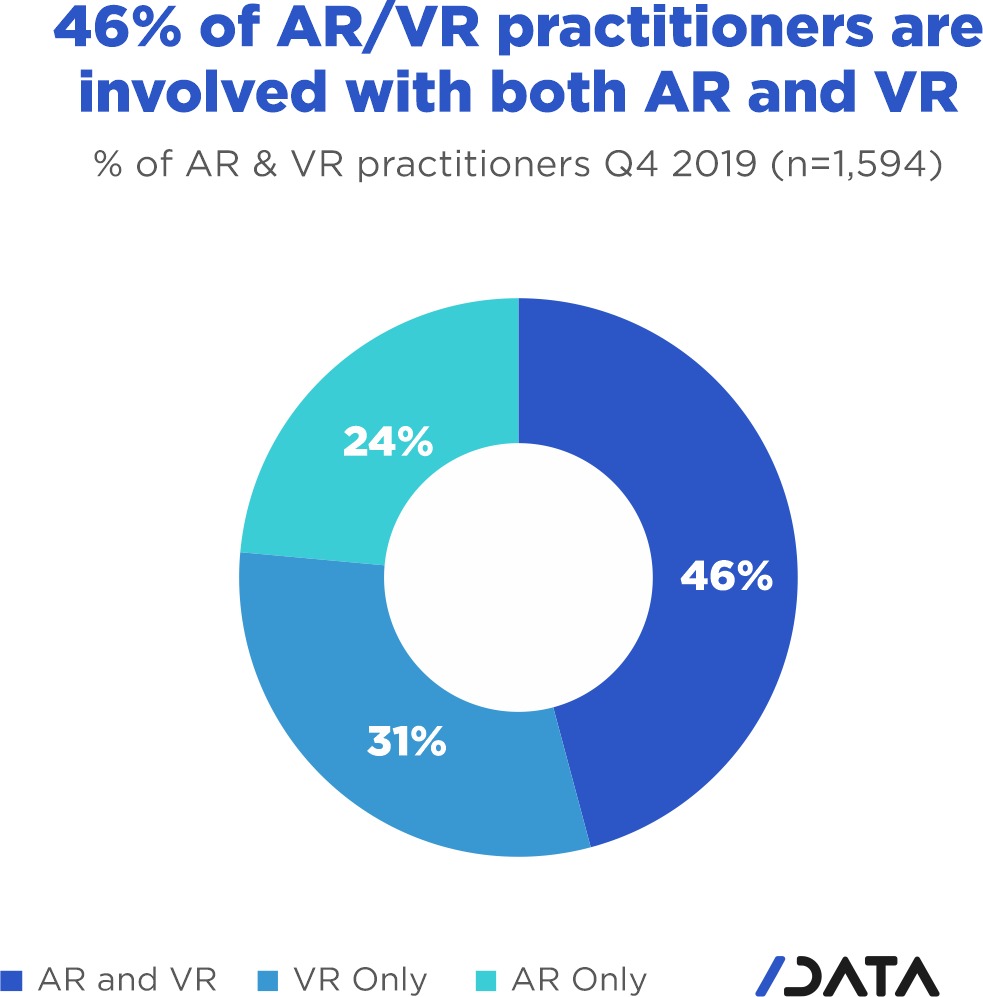 Most people who are involved in AR or VR are hobbyists, and not just in AR & VR. These people are more likely to be hobbyists in every other sector than people not involved in AR or VR. They are technology enthusiasts who like to experiment outside of their professional duties and are currently experimenting with AR & VR, potentially with a view to incorporating AR & VR into their existing development projects.

Looking at this from the other side, 28% of VR professionals also consider themselves to be hobbyists in the same sector. Out of AR professionals, 24% take on AR projects in their spare time as a hobby. This is higher than in most other sectors, with machine learning being the next highest at 26%, then games at 25%. This shows that AR & VR practitioners are enthusiastic about the sector, often having passion projects on the side.

We also see more diversity in the type of roles that AR & VR practitioners do. Because AR & VR sit at the intersection of arts and technology, practitioners often fulfill hybrid (both technical and non-technical) roles. 35% of AR practitioners fulfill a hybrid role. Subsequently, people involved in AR/VR are less likely to be ‘Pure Developers’ (people solely fulfilling developer-type roles) than those involved in other sectors. This difference is especially pronounced for respondents working in VR or AR and VR, with only 34% and 38% respectively working solely in developer roles, compared with 50% of respondents working in AR only. 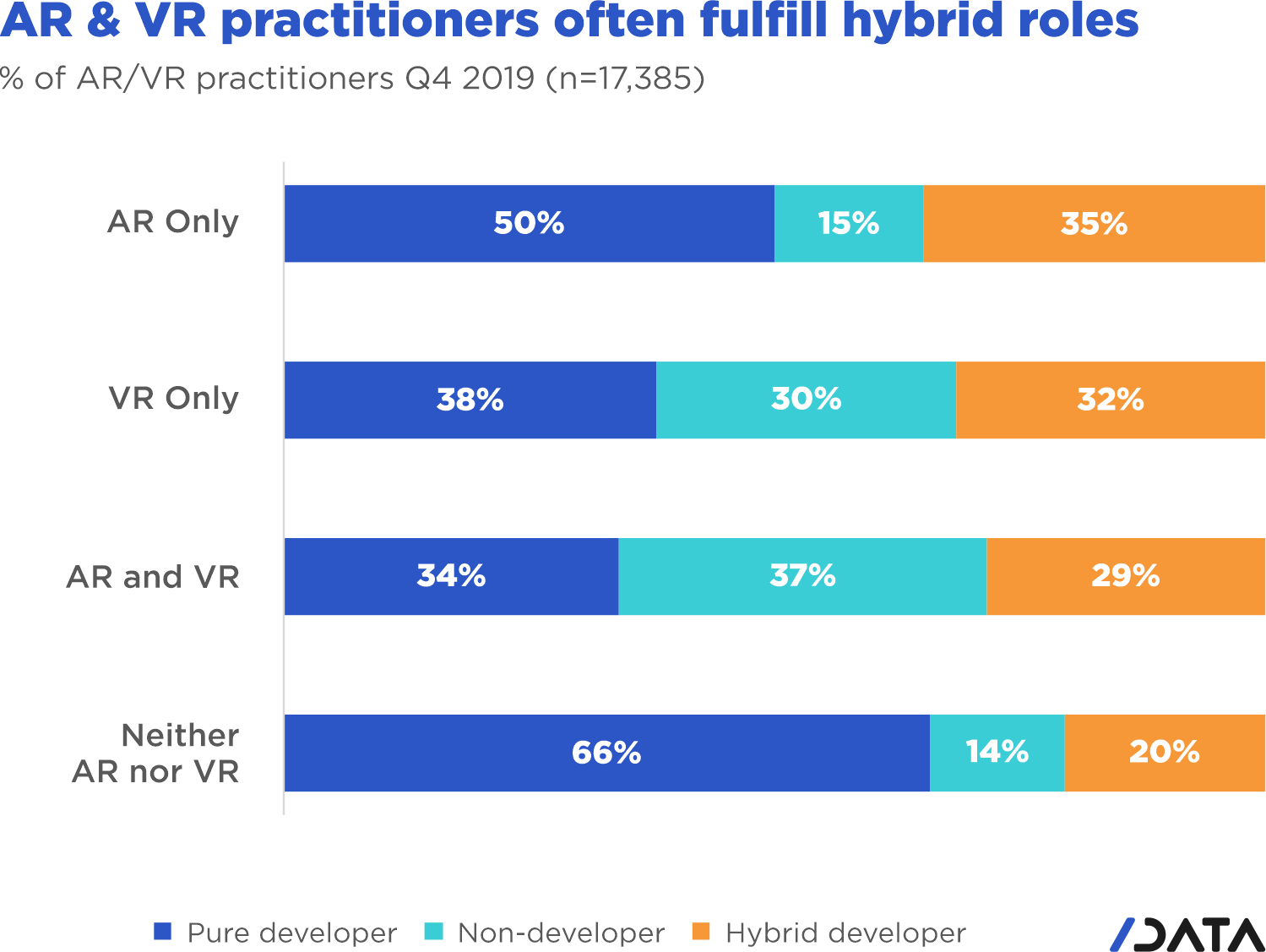 Practitioners who are involved in VR only, or VR and AR are more than twice as likely as their counterparts who are only involved in AR to be in non-developer roles. This shows that non-developers tend to favor working in VR in some capacity.

Drilling down into the roles, we see that 49% of AR practitioners work as programmers or software engineers, compared with only 37% and 32% respectively for VR practitioners and those who work in both AR and VR. Many AR practitioners are also involved in web & mobile development and machine learning. This suggests that these coders are interested in AR from a technical point of view, looking to challenge themselves by using the latest technology or to implement AR in their projects.

On the other hand, VR practitioners and those involved in both AR and VR are more than twice as likely as AR practitioners to be game designers or work as product managers. The popularity of these roles reflects the quick uptake of VR by the game market – moving from being an emerging technology to generating revenue.

Not only do AR & VR practitioners hold different roles compared to people involved in other sectors, but they also wear a lot of different hats. More than 20% of people involved in AR or VR take on 4 or more roles, compared with only 12% of people involved in other sectors. We already know that AR & VR developers are often passionate hobbyists, but it’s also clear that they have diverse interests and skills. This diversity comes from the fact that as AR and VR development technology mature, tools are appearing which require fewer technical skills to create an AR or VR product. This attracts non-developers who can more easily realize their vision.

While there is some overlap in the technologies used by developers and non-developers involved in VR, none of them have a strong appeal for both audiences. The Oculus technology suite comes closest to being the go-to platform for both developers and non-developers, with over 35% of each audience using the platform. Playstation VR, Windows 10 Mixed Reality & Google Daydream all attract a good proportion of non-developers (36%, 28%, and 26% respectively), but fail to appeal to VR developers. This landscape creates an opportunity for a technology vendor willing to invest in widening support and access for one (or both!) audiences, as a unified tech stack would provide large efficiency benefits to integrated teams by integrating with other tools and platforms, streamlining training needs and reducing the variety of tools being used. 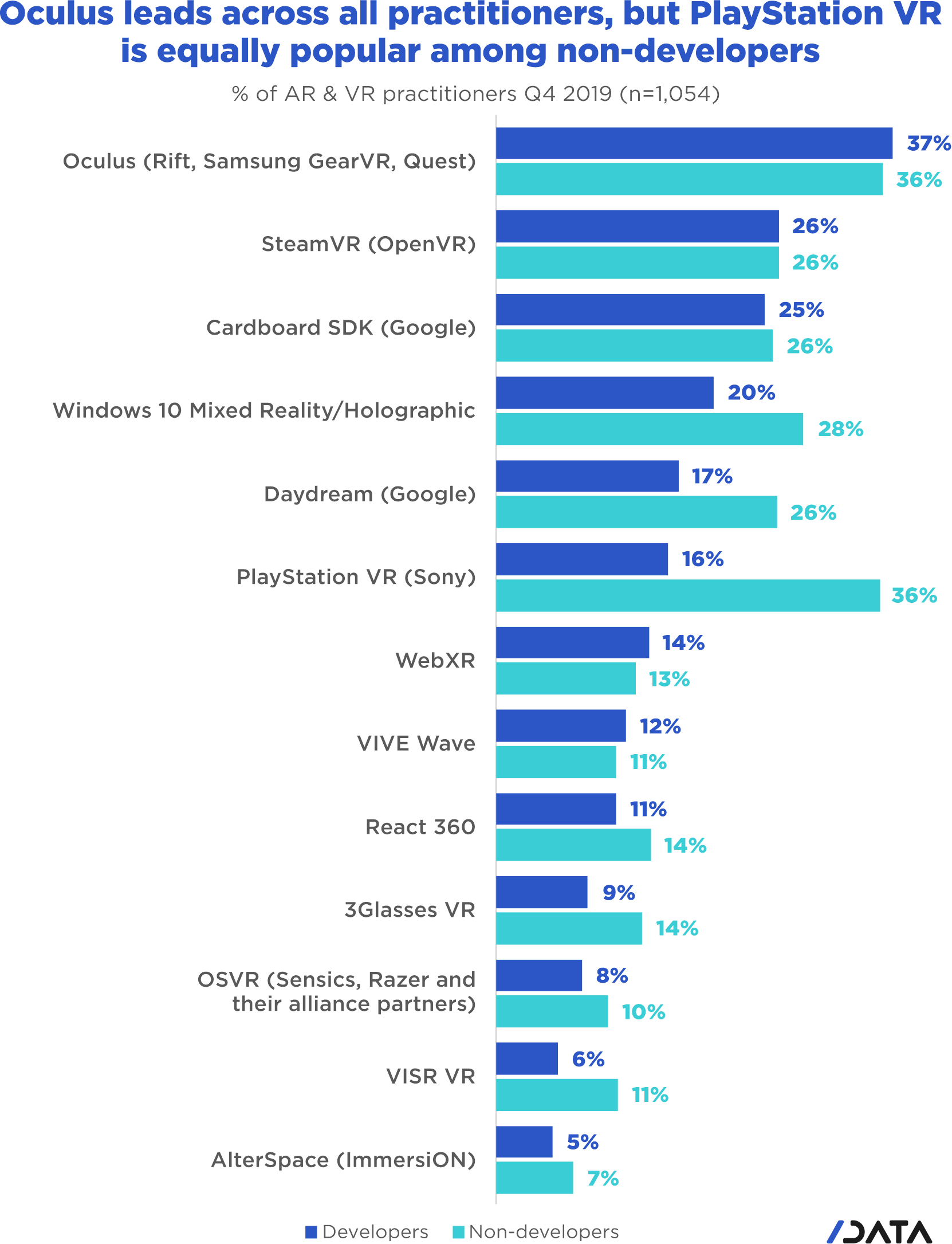 Unity Mobile AR, AR Core, and AR Kit lead the pack of software tools for people creating AR products, but all of these tools are favored more by developers than by non-developers. This suggests that there is space in the AR software market for a tool that allows non-developers to more easily realize their creative vision. 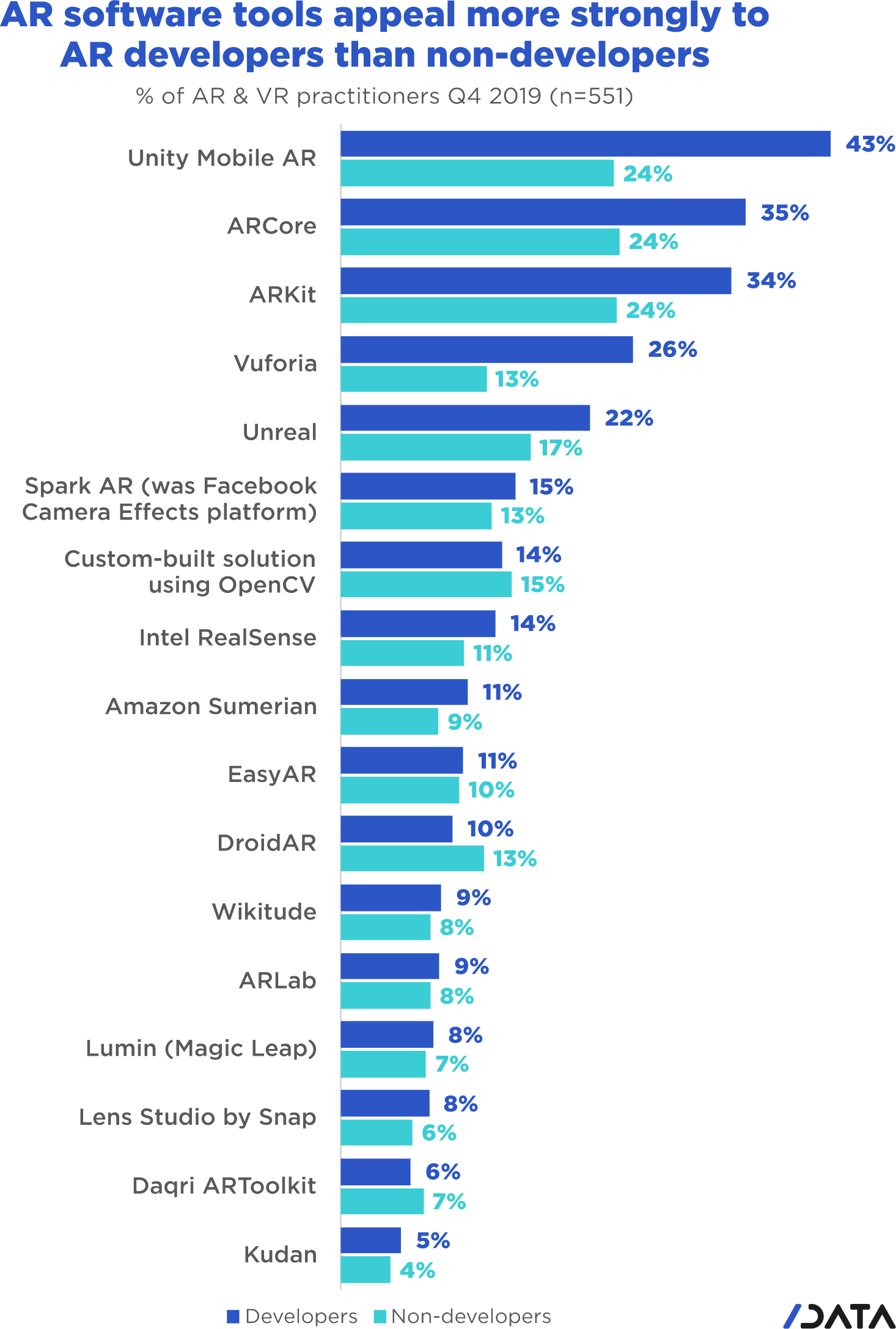 Over half of the developers use game engines and 48% use 3D modeling and rendering software. The high uptake of these technologies amongst AR/VR developers is a testament to the powerful efficiency gains available from the abstraction they offer, as well as that AR, and especially VR, lend themselves to game development.

Over 50% of AR & VR developers use game engines 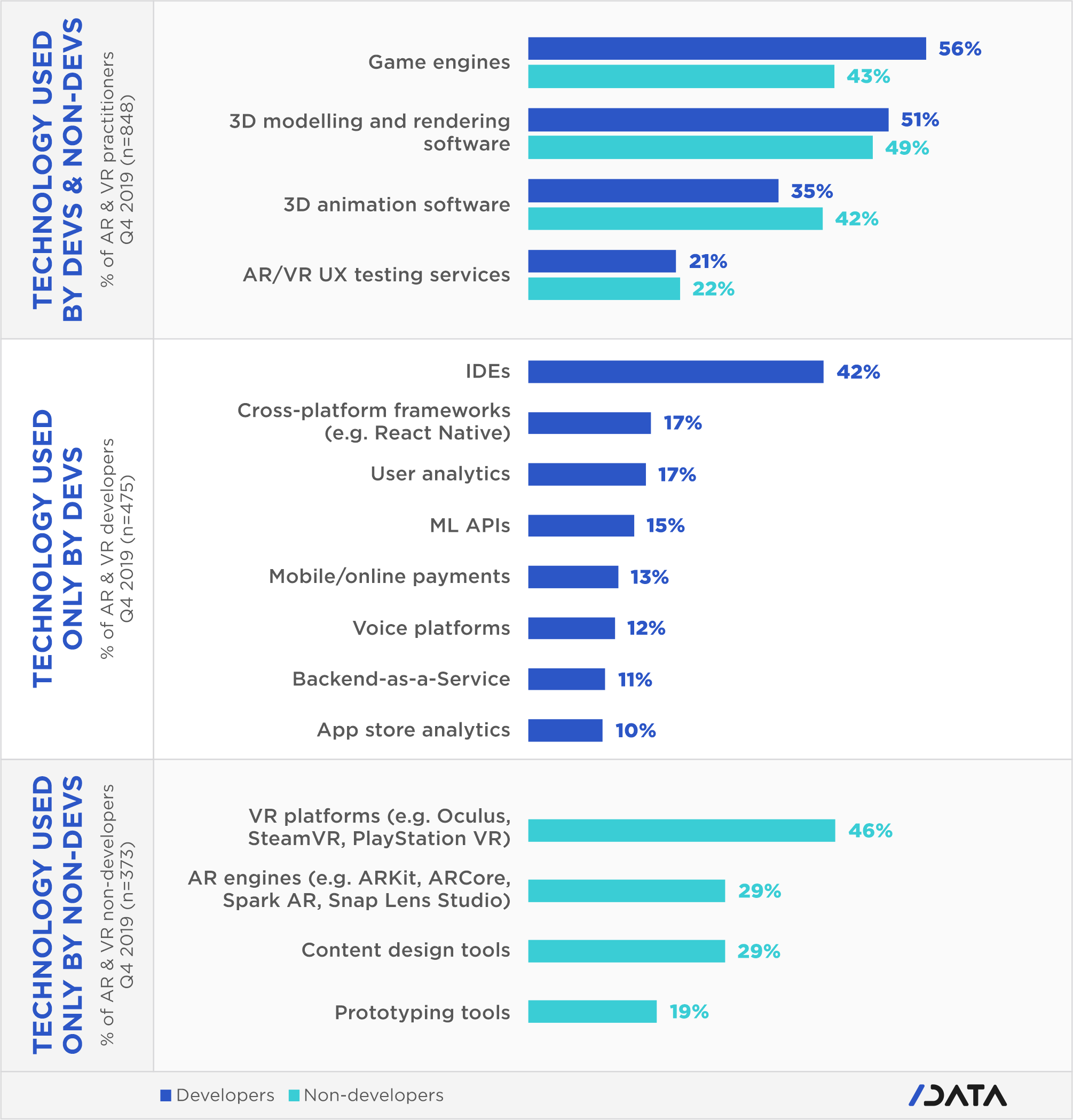 We see some overlap in the tools used by non-developers; 49% use 3D modeling and rendering software, 43% use game engines, and 42% use 3D animation software. The high usage rates of the more artistic technologies are to be expected, given that these people are, by definition, not developers.

What are your biggest pain points in getting into AR/VR development? You can share your experiences in our AR/VR survey.