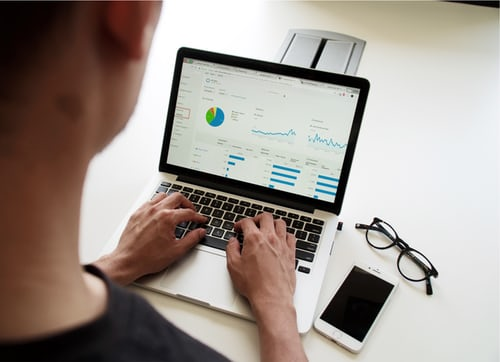 Pretty often, when I look at some AI-related topics, tutorials, or articles, I see that the graph search problem is presented as an example of how AI agents work. So, why is that? What is the relation between some classic graph searching problems and AI?

You might also enjoy:  Graph Algorithms in Neo4j: All Pairs Shortest Path

What Is Artificial Intelligence?

Looking around, you will see that there isn’t a clear and single definition of artificial intelligence. Some say that “Artificial intelligence is defined as a study of rational agents” where “a rational agent could be anything that makes decisions like a person, firm, machine, or software. It carries out an action with the best outcome after considering past and current percepts (agent’s perceptual inputs at a given instance)”. Other definitions are more philosophically trying to find the border between human natural intelligence and what a machine can do.

But all the definitions are trying to say that AI is actually the discipline when you want to know what to do when you don’t know what to do. And here comes a rational agent, that, by perceiving the environment by some sensors and looking at the old actions that it already executed, it tries to choose the next action with the best possible outcome.8

So let’s look at a classic route-finding problem. We have a graph with many nodes and you try to find the path with the minimum cost between two nodes. And here comes the definition of an AI agent. You don’t exactly know what’s the path, and a rational agent, by perceiving the environment, in our case the graph, will find that path.

But we know that there are many algorithms that are able to solve the graph search problem. Just look at the DFS, BFS, Dijkstra, or A*. Some of us know this algorithm from high school. So what’s new here? Is that actually what an AI agent does? Well yes, but not only this. AI is not just a programming paradigm, like the graph search algorithms, but, as I said before, it’s a study of rational agents that study the environment and try to choose the action with the best outcome.

An AI agent is a broad term. They go as far as machine learning, neural networks, deep learning, and much more, and they are used in finance, medical institutions, security, etc. So the graph search is just a small subtype of AI.

The main point of all these algorithms is that after we visit a node, we have to pick the next unvisited node and “visit” it in order to see if we reached the goal or not.

Like I said before, breadth-first search is a tree-based algorithm. Its name comes from the idea that the graph traversal is layer-wise. Starting from the source node, we first explore the neighbors and then we move further down.

Let’s look at the picture below:

Starting from node A, we see how this graph can turn into a tree. 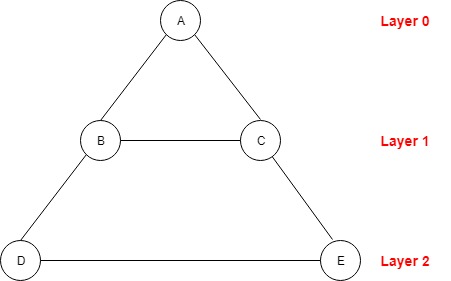 A is the starting node staying on Layer 0, then B and C are on Layer 1, and then D and E are on Layer 2. This is the order in which BFS will traverse this graph.

Looking carefully at the tree and we will see that there are some connections between B and C and E and D. This happens because our graph contains cycles. But if we want to traverse it optimally, we should not visit the already visited nodes again. So, one of the conditions when picking a node to visit is to be unvisited.

How the Algorithm Works

Considering that, after we visit the start node, we will continue to visit all of its neighbors and then we will proceed to the next “layer” and will need a queue. When we visit a node, we check its neighbors, and if the neighbors are not visited already, we add them to the queue. Then, we practically just pick the next node to visit from the queue. Another thing that we need to do is mark the visited nodes for not visiting them again. This way, we will visit all of the graph nodes only once.

Let’s look at the pseudocode:

So, using this algorithm, we are able to find any node if there is at least a path between the start node and the goal.

Finding the Path With the Lowest Cost

Let’s change our graph by adding some costs on the vertices.

The algorithm that I am going to present to you is called the Uniform cost search, which is a slightly modified version of Dijkstra, where we stop when we find the destination. The classic Dijkstra algorithm continues to visit all nodes until the queue is empty, finding the minimum cost from the start node to every other node in the graph. What’s different from the BFS is that here, we have to store a new value representing the total cost so far from the start to the current visited node.

The queue will not be ordered by the FIFO rule, instead, we will order the queue based on the current cost so far value, prioritizing the unvisited nodes that have the lowest cost so far.

Let’s have a look at the code:

This way, we will choose the next node to visit based on the minimum cost so far for each node.

But the minimum cost so far needs to be updated because by exploring the graph, we can always find better ways to reach a node. For doing that, when we visit a node, we have a look at all its neighbors and we compare their current cost so far with a new cost, which is the sum between the visited node’s cost so far and the distance between this node and its neighbor:

If the new cost is lower, this means that we found a better way to reach that node and we update that cost so far. Here, you can see more details about this algorithm and how to improve it by using some estimation, thus transforming it into A*.

What’s the Relation Between Graph Search and Artificial Intelligence?

Well, let’s recapitulate what AI is. Like I said before, artificial intelligence is defined as a study of rational agents where a rational agent could be anything that makes decisions like a person, firm, machine, or software. It carries out an action with the best outcome after considering past and current percepts (agent’s perceptual inputs at a given instance).

And what do we get with a graph search algorithm? We get a function, a program, an agent, that, given a graph, an environment, and a start node, by considering past and current percepts, calculates a series of actions for finding the goal node.

Well, we can see here that what a graph search algorithm does fits the definition of an AI agent. So, we have a basic form of AI. You see here, AI is not exactly rocket science. The definition is broad enough to include simple algorithms as the graph search. These examples give us a way to understand the basic concept of AI.

Considering the AI concepts, let’s write an AI agent that analyzes the environment and calculates a series of actions that could help us to reach the goal (we will basically build a graph search algorithm but use AI terminology).

Below is the map of Romania.

Let’s say that we are in Arad and we want to go, on the shortest path, to Bucharest. We can see that there are multiple routes that we can take. We can go from Arad to Timisoara, then Lugoj, and so on, or we can choose Sibiu then Fagaras and go straight to Bucharest. But we don’t know which path has the lowest cost.

What’s the Definition of the Problem?

A problem can be broken down in a number of components:

Let’s now see how this maps on our goal-finding problem. The initial state is being in Arad and the goaltest function returns if we reach Bucharest. All the possible states is called the state space. We have to explore the state space by applying actions and going from state to state. Starting with Arad and applying the function actions (“Arad”) we will get three possible actions. Going to Zering, Timisoara, or Sibiu. Now, with this in mind, we can separate the state space into three parts:

So, being in the explored part of the state, we need to select a new state from the frontier, apply an action, and move to that state, thus expanding the frontier.

So, we have a frontier that, at first, consists just in the start node. Then, at each iteration, we get the an element from the frontier, we move to the next state, and if we reached the goal, we exit with the message “found the goal”. Optionally, we can also print the path. Otherwise, we add the new states to the frontier.

Now, depending on how you will get the new state from the frontier, you could implement a classic BFS, a uniform cost search, or an A* algorithm. Here, you could see more clearly the differences between these algorithms and the best algorithm for detecting the shortest path from Arad to Bucharest.

Of course, the AI agents don’t resume to just graph search. We have AI algorithms for face recognition, we have machine learning, neural networks, and statistic-based algorithms, where the only limit is mathematics. But this doesn’t have to scare as, as the basic concepts are not that hard to understand.

From Dijkstra to A Star (A*), Part 1: The Dijkstra Algorithm