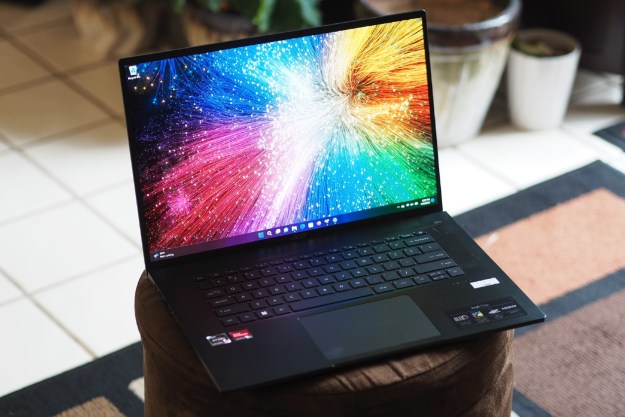 “The Acer Swift Edge is a remarkably thin and light 16-inch laptop with a class-leading OLED display, but it feels a bit flimsy and creative performance is lacking.”

If you’re looking for a large-screen laptop with the power to run the most demanding creative apps, then machines like the (very expensive) Apple MacBook Pro 16 and (much more affordable) HP Envy 16 have you covered. They’re bulkier and heavier machines, though, and overkill for anyone who wants a 15-inch laptop (or larger) for simpler productivity multitasking and media consumption instead.

That’s where a laptop like the Acer Swift Edge SFA16-41 comes in, offering a 16-inch OLED 4K+ display in a chassis that’s remarkably thin and light. Just how thin and light? Well, how about 0.51 inches and 2.58 pounds? Those are remarkable stats, and you feel them the minute you pull the Swift Edge out of the box. There’s a price to pay in rigidity as well as in dollars, but you get a lot of laptop for your investment.

At the time of writing, there’s only one configuration of the Swift Edge, available from either Costco or directly from Acer. You’ll pay $1,500 for an AMD Ryzen 7 6800U CPU, 16GB of RAM, a 1TB SSD, and a 16-inch 16:10 4K+ OLED display. That’s a distinctly premium price, but it’s justified in part by the incredibly portable design, fast components, and spectacular display.

Thin and light, but at what cost?

As mentioned above, the Swift Edge is ludicrously thin at 0.51 inches and light at 2.58 pounds. That’s less than most 14-inch laptops — and quite a few 13-inch machines — and it’s much thinner than the 0.58-inch Microsoft Surface Laptop 4 that’s on our list of thinnest laptops (soon to be replaced by the Swift Edge). It’s also considerably lighter than the 4.71-pound Dell XPS 15. It’s hard to express how insubstantial the Swift Edge feels in hand compared to most other large-screen laptops. It’s not quite as thin as the 0.44-inch M2 MacBook Air, but this is as close as Windows laptops get.

However, there are prices to pay for being this thin and this light.

To begin with, most laptops I’ve reviewed with thin and light designs use magnesium alloys rather than aluminum. The result is inevitably a lack of rigidity, which is most apparent in the Swift Edge’s very bendable display and flexible keyboard deck. It’s not fair to say that the laptop isn’t robust, because magnesium alloy is plenty strong. But if you like your laptop to sport a dense, rigid feel, then you’ll be disappointed with the Swift Edge.

The Swift Edge was a decent performer in our battery tests, but the LG Gram 16 2-in-1 demonstrates how important battery size is to battery life while the MacBook Pro 16 demonstrates the efficiency of Apple’s ARM architecture.

Some ultrathin laptops suffer from extremely shallow keyboards, but the Swift Edge doesn’t fall into that trap. Its keyboard switches have plenty of depth and a distinct click when engaged.

Some people might find them to be too light, though. It’s not the worst keyboard I’ve tested, but it’s not the best, either. The touchpad is large and precise for a mechanical version, with buttons that are quiet enough, if a bit abrupt. The display isn’t touch-enabled, which I miss.

Another area where the thin design doesn’t force compromises is connectivity. Surprisingly, the Swift Edge has plenty of ports, although Thunderbolt 4 is lacking. That’s due to the AMD chipset, though, rather than the thin chassis.

I’d talk more about the laptop’s aesthetic, but there’s not much to say. The chassis is “Olivine Black,” and there’s zero bling. It’s a minimalist design like so many laptops today, with nothing but its extreme thinness to make it stand out. If you want a laptop that attracts attention, then the Swift Edge isn’t it. The bezels are very thin, but they’re also plastic, which detracts from what would otherwise be a modern look.

Still, Acer managed to fit in a 1080p webcam, which is great, but there’s no infrared camera for Windows 11 Hello support. The fingerprint reader embedded in the power button works fine, though.

Not a lightweight display

A 16-inch display demands a high resolution to avoid jagged text and pixelated images. The Swift Edge runs at a productivity-friendly 16:10 aspect ratio to go with a 4K+ (3,840 x 2,400) resolution, and that’s more than sharp enough. Even better, it’s an OLED panel, meaning it’s bright, has incredibly wide colors with very good (but not excellent) accuracy, and its deep contrast provides for inky blacks.

Whether you’re using the laptop for productivity work where you demand sharp, black text or consuming media, you’ll love this display. The Swift Edge isn’t fast enough, as we’ll see, for demanding creators, but if you need to edit a photo in a pinch, then the display will accommodate you.

The audio wasn’t as impressive, with just two downward-firing speakers providing sound that’s suitable for the occasional YouTube video and not much else. Some larger laptops, like the Dell XPS 15 and the MacBook Pro 16, provide much better audio quality.

There’s no doubt that the gorgeous, spacious OLED display begs for demanding creative work. However, the most powerful creative applications make use of discrete GPUs to accelerate a variety of tasks, something that the Swift Edge doesn’t have. Given the thin chassis that already makes it difficult to move lots of air around, it’s impressive that Acer managed to pack in an eight-core/16-thread AMD Ryzen 7 6800U CPU. That’s a low-power CPU (15 watts to 28 watts) aimed at thin and light laptops, so it competes best against Intel 12th-gen CPUs in the same power range. Recently, though, most large laptops (and some smaller ones) use 45-watt Intel 12th-gen chips and so start with an advantage.

Ultimately, you can expect solid productivity performance in CPU-intensive tasks, but you’ll be limited in creative work due to the slower integrated AMD Radeon Graphics. And I saw that productivity performance in our suite of benchmarks. In the table below, which lists results in both balanced and performance modes, I compare the Swift Edge to other large machines without discrete GPUs. Note that the Acer’s performance mode was much slower than its balanced mode, indicating poor tuning or thermal throttling issues caused by opening up the CPU. It’s best to keep it in normal mode.

Intel’s H-series 12th-gen CPUs were faster than the AMD chip, but they’re higher-clocked processors that burn more power. The Swift Edge’s results are competitive enough that the laptop can be depended on to churn through demanding productivity workflows while enjoying longer battery life.

There are likely plenty of people who want a large laptop with a spectacular display for productivity and media consumption, but they don’t want to lug around a bulky, heavy machine. At least, that’s what Acer hopes. For those people, the Swift Edge is a remarkable laptop.

It’s incredibly thin and light, and yet it provides solid productivity performance, good enough battery life, and an awesome visual experience. That justifies the premium price of $1,500, and I’m happy that it doesn’t cross the $2,000 barrier, where it would be too expensive. There aren’t many other laptops like it, so if it fits your performance requirements, there’s little reason not to consider the Swift Edge as your next laptop.